The tour, from September 26 to November 4, will feature an evening of politically
relevant live music, DJs, local performers, special guests who can speak truthfully
to issues, films & PSAs, plus an open mic Q & A. Filmmaker Penny Little
will present her films: Award winning Electile Dysfunction and 911
Dust and Deceit. 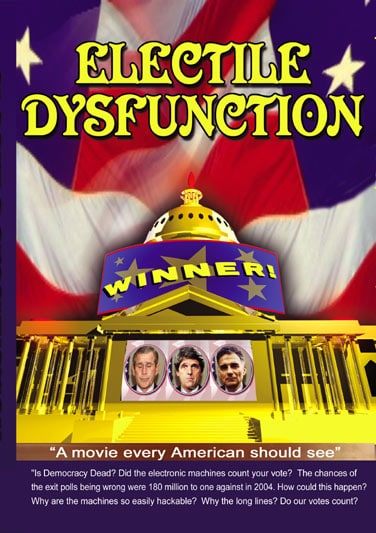 Our
tour stops include: Santa Barbara, Los Angeles, Flagstaff, Albuquerque, Austin,
Tulsa, Little Rock, St. Louis, Springfield, Bloomington, Chicago. The tour will
be videotaped and clips will be made available through the website. Because
the National Party Conventions will be over, our mission is to bring more awareness
to the issues of Election Reform, localizing, and forming a real opposition
to the corporatocracy running our Country. The Empire has no clothes, and we’re
waking up to the Truth!
Schedule & Program

Each event will be uniquely unconventional. One of the features of the tour
is inviting local guests, musicians, performers. Local issues will be featured
to educate, encourage and empower people to get involved in political process.
The events are tailored to the needs of the sponsoring organizations and the
venues.

The Free Speech Contest is an opportunity for you to try out your skill as
a candidate. What would you say to the US Electorate if you were running for
office? In a 60 second or maximum 2 minute speech. Bring your friends since
the contest is judged by clap-o-meter!

Between
now and the elections, more people are thinking about political process, why
we should get out and vote*, and what are the real issues. Whether Radical or
Progressive, Libertarian or Green, Democrat or Republican, we want fair elections.
We’re against wars based on lies. We want our votes to count. We want
our Constitution and our civil liberties back. We want media to report the unbiased
Truth. We don’t think torture is a family value. We can agree on these
things. We’re in unconventional times, where it’s no longer just
about party affiliation, left or right. We want a government that is accountable
to “We the People”.

Besides building a stronger grassroots network, our goal is to engage more
people in the political process, because the power of our vote is real. *(Why
else would they try so hard to steal it?). We will help support and bring attention
to actions and campaigns which will strategically create an coalition of opposition
to the the corrupt criminal cabal in power. Our country and our world deserve
better.

*Even if you don’t believe that your vote counts, or that it matters, or that
the two party Kool-Aid is working, when good people do nothing, evil wins.

We can make a difference if we work together!

Events will vary according to venue, availability of artists and speakers,
and sponsoring organizations’ focus. Confirmed musical acts include: Wil B,
Eliza Jane, The Away Team.

Please contact us to discuss possibilities. Here are a couple:

– The Total Unconvention: Venue: University venue, hotel,
with additional rooms: Add your own unconference
or workshops and make it a larger event, which includes examining strategies,
participant created workshops & presentation, or arrange a special morning
event with touring group.

* The events will begin in the early evening, with a reception with food from
5-6 pm for invited guests. This can be a potluck organized by sponsors, or sponsors
can organize local vendors to provide the food for the guests, and sell food
to audience. Vegetarian, organic is requested when possible. Some venues may
have concessions.

Some additional ideas which can be part of program:

Free speech contest: Each person gets 2 minutes to say what
they would like to tell the American people if they were running for President.
Judged by applause.

Auction: For larger events, each sponsoring group solicits
donations or donates something to help cover costs of touring artists. This
can be a silent auction or a “Fundraiser Intermission”, which is part
of the program.

Your own Ideas….
We can make a difference if we work together!

In some instances, special morning events can be arranged. In addition local
organizing partners may choose to create an “unconference” or workshops
before or the day after the evening event to create your own “Unconvention”
to brainstorm strategies to Take Back Our Elections, change the election process
so we have a voice, and/or begin the dialogue for creating a coalition of opposition
to the existing powers-that-be.