This morning, on the fifth anniversary of the Iraq invasion, ABC’s Good Morning America aired an interview with Vice President Cheney on the war. During the segment, Cheney flatly told White House correspondent Martha Raddatz that he doesn’t care about the American public’s views on the war:

CHENEY: On the security front, I think there’s a general consensus that we’ve made major progress, that the surge has worked. That’s been a major success.

RADDATZ: Two-third of Americans say it’s not worth fighting.

RADDATZ: So? You don’t care what the American people think?

CHENEY: No. I think you cannot be blown off course by the fluctuations in the public opinion polls. 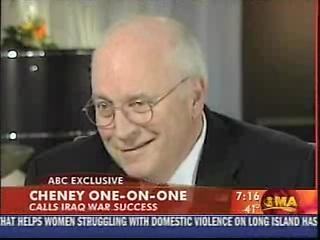 This opposition to the war is not a “fluctuation” in public opinion. The American public has steadily turned against the war since the 2003 invasion. According to a new CNN poll, just 36 percent of the American public believes that “the situation in Iraq was worth going to war over — down from 68 percent in March 2003, when the war began.”