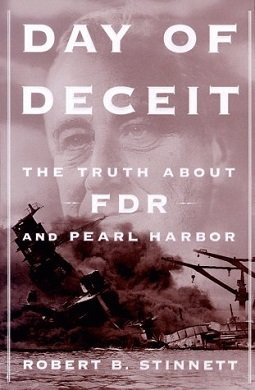 Sixty-seven years ago, on Sunday, December 7, 1941 the Japanese attacked Pearl Harbor, killing over two thousand people and wounding over a thousand. The attack enabled FDR to enter World War II, and prompted huge numbers of Americans to volunteer for military service. In the book
Day of Deceit: The Truth About FDR and Pearl Harbor (2000), Robert Stinnett unveiled a memo outlining an 8 point plan to provoke Japan into attacking the US.

Admiral Kimmel, Commander in Chief of the Pacific Fleet, was removed from office and demoted, taking the blame for the losses at Pearl Harbor soon after the attacks. Researchers over the course of many years believe that critical information was withheld from Kimmel and that he was unjustly punished. One of those researchers was his grandson, Manning Kimmel IV, who persuaded the U.S. Senate in 1999 to pass a nonbinding resolution exonerating Admiral Kimmel and Army Lieutenant General Short.

Philip Zelikow, author of the US “Pre-Emptive War Doctrine,” has studied and written about the use, and misuse, of history in policymaking, including “beliefs thought to be true (although not necessarily known to be true with certainty)”…“Searing events that take on ‘transcendent’ importance and, therefore, retain their power even as the experiencing generation passes from the scene.” In 1998 he co-authored the article Catastrophic Terrorism: Elements of a National Policy, which speculated that if the 1993 bombing of the World Trade Center had succeeded,

“the resulting horror and chaos would have exceeded our ability to describe it. Such an act of catastrophic terrorism would be a watershed event in American history. It could involve loss of life and property unprecedented in peacetime and undermine America’s fundamental sense of security, as did the Soviet atomic bomb test in 1949. Like Pearl Harbor, the event would divide our past and future into a before and after. The United States might respond with draconian measures scaling back civil liberties, allowing wider surveillance of citizens, detention of suspects and use of deadly force.”

Zelikow, as the Executive Director of the 9/11 Commission, was able to control the “investigation,” write an outline for the contents of the report prior to the investigation, omit or distort facts, and edit the final report (much of it based upon confessions derived by torture). Amazingly, he and the 9/11 Report blamed the attacks upon a “failure of the imagination” on the part of the US government to even conceive of using airplanes as weapons. (This false statement, contradicted by innumerable reports and facts, was unquestioned and repeated by the mainstream press.)

In 1944 George Orwell wrote: “History is written by the winners… The really frightening thing about totalitarianism is not that it commits atrocities but that it attacks the concept of objective truth: it claims to control the past as well as the future… There is some hope, therefore, that the liberal habit of mind, which thinks of truth as something outside yourself, something to be discovered, and not as something you can make up as you go along, will survive. But I still don’t envy the future historian’s job. Is it not a strange commentary on our time that even the casualties in the present war cannot be estimated within several millions?…”

The failings of the official 9/11 Report were clearly chronicled by David Ray Griffin in his books– The New Pearl Harbor- Disturbing Questions about the Bush Administration Volume I, and his latest book — The New Pearl Harbor Revisited, 9/11, the Cover-Up, and the Exposé — and in many documentaries, including 9/11: The Myth and the Reality. However, the report was accepted by the press uncritically. Congress accepted the official narrative and used it to justify the creation of Homeland Security and the National Counterterrorism Center, and to pass the most dramatic change since 1947 with the Intelligence Reform and Terrorism Prevention Act of 2004, which created a new Director of National Intelligence reporting directly to the President, determining and directing the budget of all the national intelligence agencies.

The Project for a New American Century, founded in 1997, advocated for American “leadership” throughout the world, including the extension and reorganization of the military. Their document, entitled “Rebuilding America’s Defenses: Strategy, Forces and Resources for a New Century,” states:

“The process of [military] transformation… is likely to be a long one, absent some catastrophic and catalyzing event­–like a new Pearl Harbor.”

Immediately following 9/11, the military received substantially more funding and was expanded to fight the “war on terror,” a war that was not expected to end in our lifetimes. “Pearl Harbor” was the “code word or concept” behind the preamble and the aftermath of the event. For nearly a year prior to 9/11, “Donald Rumsfeld routinely stated that the inevitability of surprise was a guiding principle of the Bush administration’s national security strategy and handed out or recommended Roberta Wohlstetter’s 1962 book, Pearl Harbor: Warning and Decision.” [1] The Hollywood film, Pearl Harbor, which was released in May, 2001, conveniently maintained the popular myth and served psychologically as a recruitment tool. On 9/11 Bush, himself, very publicly wrote in his journal, “The Pearl Harbor of the 21st century took place today.”

On 9/11, in response to the horrific attacks on our country, we entered into “Continuity of Government,” but, unbeknownst to most of the American people, a shadow government has been in place ever since. Cheney and Rumsfeld worked on the plans for Continuity of Government for decades prior to 9/11, the provisions of which have been shrouded in secrecy. Even members of the Homeland Security Oversight Committee are not allowed to see its classified plans, but apparently Congress is an expendable entity when Continuity of Government is declared. While the country is in a declared “State of Emergency,” the Constitution and the Bill of Rights are ignored. In this context, the recent financial crisis, the Military Commissions Act, and the deployment of 20,000 US troops trained to respond to civil unrest as well as terrorist attacks within the US are less than reassuring.

Although time and public opinion appear to be sweeping the now unpopular Bush and Cheney from the Oval Office, their policies and legacy remain. There has been no accountability for the “intelligence failures” leading up to 9/11, nor for the “failure to intercept the hijacked planes.” In a report released last August, NIST claimed that for the first time in modern history, fires felled a 47-story steel-framed building, World Trade Center 7, even though it exhibited all the characteristics of a controlled demolition. An earlier report claimed that fires plus two airplanes brought down the twin towers, ignoring the witness testimony and physical evidence that explosives were used.

Zelikow is allowed to praise the incoming Obama cabinet on National Public Radio. US Defense Secretary Robert Gates, after expanding upon Zelikow’s pre-emptive strike doctrine to include nuclear first strikes upon nations who might develop nuclear weapons, is retained by Obama as Defense Secretary. The winners might change, but the lies remain the same, as well as the direction of US foreign policy.

“All you have to do is delay the truth until it no longer matters.”

The rulers seem particularly afraid of the internet, the information technologies which allow people to communicate directly, bypassing corporate and government control, the erosion of faith in government and the media, the challenges to their tenuous claims to be the legitimate elected representatives of the people or the titans of industries which serve humanity. The promised endless wars provoke endless protests and increasing repression to quell the rising tide of dissent.

Just as Pearl Harbor was encouraged and used by FDR as a pretext for war, 9/11 has been an equally deceptive new Pearl Harbor used to expand the National Security State into a Global Police State, where torture, pre-emptive war, surveillance, curtailment of civil rights, the Rule of Fear dominates the Rule of Law. As we remember the tragedy of Pearl Harbor, and we should educate and remind our fellow citizens that it was encouraged and allowed to happen by FDR as a pretext for war. Incidents since then- the Gulf of Tonkin, the story of babies thrown out of incubators during the invasion of Kuwait, were fabrications to trick the American people into supporting war. While the best historical parallel to 9/11 is the Reichstag Fire, used by Hitler to criminalize the communists and pass the Enabling Act (which bears a striking resemblance to the PATRIOT Act), Pearl Harbor and 9/11 both have been used to make the most sweeping military reorganizations within the US possible. Both events have served the powerful interests who have used the events to deceive the public, recruit soldiers, and launch wars.