EPIC (Finally) Obtains Memos on Warrantless Wiretapping Program: More than eight years after filing a Freedom of Information Act request for the legal justification behind the “Warrantless Wiretapping” program of President Bush, EPIC has now obtained a mostly unredacted version of two key memos (OLC54) and (OLC85) by former Justice Department official Jack Goldsmith. EPIC requested these memos just four hours after the New York Times broke the story about the program in December 2005. When the agency failed to release the documents, EPIC filed a lawsuit. The ACLU and the National Security Archive later joined the case. These two Office of Legal Counsel memos offer the fullest justification of the warrantless wiretapping program available to date, arguing that the president has inherent constitutional power to monitor American’s communications without a warrant in a time of war. But some parts of the legal analysis, including possibly contrary authority, are still being withheld. The warrantless wiretapping program was part of “Stellar Wind,” a broad program of email interception, phone record collection, and data collection undertaken by the NSA without the approval of Congress. 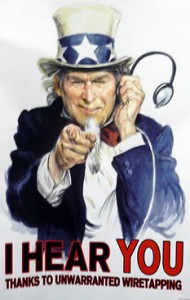 In December 2005, the New York Times reported that President Bush secretly issued an executive order in 2002 authorizing the National Security Agency to conduct warrantless surveillance of international telephone and Internet communications on American soil. President Bush acknowledged the existence of the NSA surveillance program and vowed that its activities would continue.

EPIC submitted FOIA requests to the NSA and four Department of Justice components just hours after the existence of the warrantless surveillance program was first reported. Noting the extraordinary public interest in the program – and its potential illegality – EPIC asked the agencies to expedite the processing of the requests.

The DOJ agreed that the requests warranted priority treatment, but has now failed to comply with the FOIA’s usual time limit of twenty working days. In January 2006, EPIC filed a lawsuit (pdf) against the DOJ to compel the immediate disclosure of information concerning the NSA surveillance program, and asked (pdf) the federal district court in Washington to issue a preliminary injunction requiring the release of relevant documents within 20 days. EPIC’s case has been consolidated with a lawsuit (pdf) filed by the American Civil Liberties Union and National Security Archive concerning the same documents.

On February 16, 2006, U.S. District Judge Henry H. Kennedy ordered (pdf) the DOJ to process and release documents concerning the NSA program within 20 days, or by March 8, 2006. The day before it was required to disclose the documents, the Justice Department asked (pdf) Judge Kennedy for an additional four months to process some of the material responsive to EPIC’s request, which Judge Kennedy has allowed (pdf).

Once the DOJ completes its processing of the material, any decision to withhold the requested documents will be subject to judicial review, and Judge Kennedy will have the ability to order “in camera” production of the material and make an independent determination concerning public disclosure.

The NSA has released two internal messages (pdf) in response to EPIC’s request, but is withholding all other responsive material. EPIC filed suit (pdf) against the NSA in February 2006, asking a federal court to compel the release of the withheld documents. EPIC later dismissed the case.