THIS MARCH END THE MADNESS

After 5 years of senseless, endless war, torture, government deception and suppression . . .
YOU have a voice
YOU have a choice

Bush Program of Endless Imperialistic War or Join us March 19
More Torture, Rendition to Secret CIA Prisons or Demand a No Torture State! Display a No Torture Banner
Accept the Bush Agenda of Oppression and Suppression or Join the Resistance Movement or Become a WCW Member
Allow Your Government to Abolish Privacy or Support the March 19 Actions
Complacency and Complicity as Our Constitution, Our Rights Quickly Erode or Declare It Now! Drive Out the Bush Regime!

The Choice is Yours:

Will this month be 31 more days of bloodshed, corporate war-mongering, death and devastation?

Or will this be the month we unite to end the madness and drive out the Bush regime?

World Can’t Wait – Drive Out the Bush Regime
Awarded MOST VALUABLE CRUSADE OF 2007!

WHY HOPE FOR CHANGE WHEN YOU CAN BE THAT CHANGE? 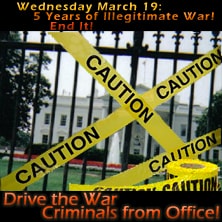 After a weekend of powerful testimony of U.S. veterans of the U.S. wars of occupation in Iraq and Afghanistan Winter Soldier, what will you do to end these endless and criminal wars NOW?

After Bush vetoes ban on torture, including waterboarding, what will you do to tell the world that we won’t live in a torture state?

On the 5th Anniversary of Endless and Criminal War in Iraq, what will the world see on March 19th?

Be in Washington, DC on Wednesday, March 19th!

World Can’t Wait calls on everyone to get into the streets and PROTEST, demanding an immediate end to the occupation of Iraq.

1:30 p.m. in Lafayette Square Park join World Can’t Wait and a sea of orange jumpsuits in solidarity with and representing those being tortured in Guantánamo Bay Prison, Abu Ghraib, Bagram in Afghanistan, and CIA “black sites” around the globe. A demonstration showing that waterboarding IS TORTURE, is planned directly in front of the residence of our biggest war criminal other than Dick Cheney.

The Park will become a rallying center for all those who are determined to put an end to this illegitimate and immoral occupation and demand justice by driving the war criminals from office now, not waiting for 2009! We are done with secret renditions, warrantless spying, lying to the public, using signing statements to disobey laws, rounding up immigrants and detaining them. 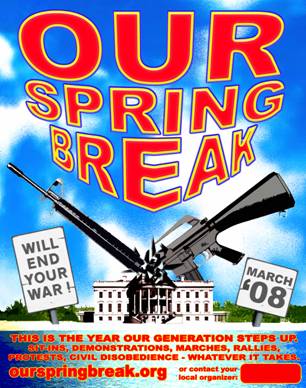 This March, join a mass of students and youth for spring break in Washington, D.C. to end the war in Iraq.

We’ll have sit-ins, demonstrations, marches, rallies, protests… We’ll sing and dance… We’ll do Nonviolent Civil Resistance, we’ll do banner drops, we’ll do creative nonviolent direct action, and we’ll do everything in our power to bring an end to the war in Iraq, telling Congress, “Our spring break will break your war!”