Ignorant spinmeisters across the corporate spectrum, and on foundation-funded “left” media, have been carefully choosing their headlines today. As Donald Trump Tweets at Jeb Bush and vice-versa, the topic of the actual September 11th attacks needs to be delicately spun to suit the expected narrowly tailored spectrum of so-called “debate.” This is the antithesis of debate, by the way, an apriori excising of all inconvenient facts from the discussion. 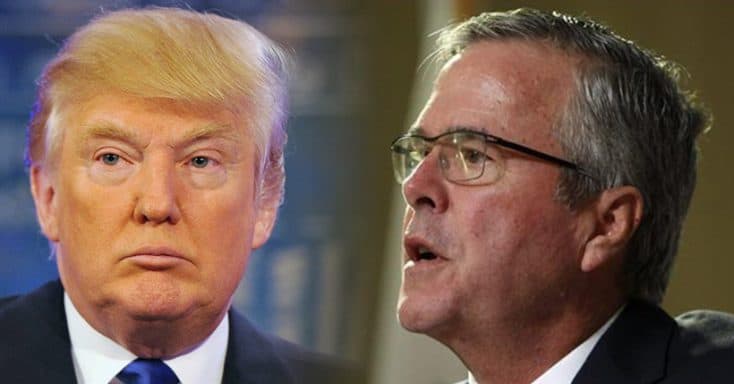 We have been living in a Big Lie for 14 years, and many millions of Americans have railed against it. The facts of the September 11th attack operation are largely sealed and kept classified to protect Saudi financiers and treasonous US officials who gave the green light. Beyond acquiescence, the legitimate investigations of terrorists prior to 9/11/01, such as the case of Zacharias Moussaoui, were deliberately halted and thwarted by superiors in the bowels of the intelligence establishment. We have seen a massive cover-up, on par with the Warren Commission, concerning Saudi sponsorship of the hijackers. This cover-up, by two administrations, is the highest treason (“aid and comfort” to the enemy), and should be cause for impeachment and prosecution immediately. That’s reality, as the facts of the attacks show unequivocally.

Senator Bob Graham has, since December of 2002, told the American public of “foreign governments” providing money and logistical support to the hijackers. To erase these revelations from history the Bush regime censored his 28 pages on foreign support to the 9/11 hijackers, and then they sent in their professor of myth-making, Philip Zelikow, to fabricate a facsimile of an investigation.

Zelikow would fire Commission staffer Dana Leseman for simply getting a copy of the 28 pages, in order to pursue the leads. He also refused to investigate the list of Saudis provided by Commission investigators, claiming that there were simply too many. Zelikow’s response was to cut the list down and hobble the investigation, from behind the scenes.

Even Richard Clarke, the highest counter-terrorism official in the United States on 9/11, has said that “fifty” CIA personnel were aware that the San Diego Al Qaeda cell was in the country, for 16 months prior to the attacks.

For over a year the CIA did absolutely nothing, except hide the facts from Clarke and from the FBI. This 16 month window was allegedly a time of “hair on fire” urgency concerning an impending terrorist attack. A May 1, 2001 presidential briefing warned the White House in black and white that “‘a group presently in the United States’ was planning a terrorist operation (NY Times).”

A group presently in the United States: the president was informed. The CIA knew who these guys were. The CIA hid their existence from the FBI. The CIA even hid the information from a National Security Council meeting one week prior to the attacks, as per Richard Clarke, who was present at the meeting.

Senator Graham also talked about the shenanigans in Florida, where the government claimed to have no surveillance on the abandoned mansion in Sarasota, only to have to admit to hiding 80,000 pages. Those are 80k pages that were completely ignored by the so-called 9/11 Commission Investigation. That alleged mistake, taken in context, could also be considered “aid and comfort” to named individuals who were directly connected to the hijackers, including the alleged “lead hijacker” Mohamad Atta. The government’s own story claims that these are the people who committed the 9/11 attacks, and yet hides the evidence of who they consorted with and from whom they received money.

Any “aid and comfort” to terrorists attacking the US should be considered Treason, as per the US Constitution, Article 3. The Constitution is very clear about people engaged in “levying war” on the country. An after the fact cover-up is “adhering to their enemies, giving them aid and comfort.”

Enter Jeb Bush, the brother of the man who did absolutely nothing to fulfill his duties as Commander in Chief of the military at 9:05am, when he was informed that “America is under attack.” George W. Bush sat there for twenty minutes. As the Washington Times reported his press secretary, Ari Fleischer (corrected: 10/20), held up a message on a legal pad to signal President Bush: “Don’t say anything yet.”

Later that day Fleischer would lie to the world and claim “No warnings” were received, a demonstrable falsehood so glaring it should have been cause for his arrest at that moment.

But the next day, 9/12 of 2001, when the world was fixated on the rubble in lower Manhattan, Florida Governor Jeb Bush went to work. He ordered all the files stored at the Venice Florida police department that concerned the local flight schools loaded into a Ryder truck. The flight schools were where Mohamad Atta and company allegedly learned how to fly. The truck full of police records drove to the Sarasota Airport, and up onto a C130 transport plane, and flew out with Jeb aboard. The files were never received by the FBI, and are missing to this day.

Jeb Bush should be considered a person of interest in the mass murder of September 11th. Perhaps that’s why he’s come out shrieking hysterically at Trump this past weekend. Enough evidence is already out in public to indict him and his brother for high treason. Only, the majority of Americans are misled about what we know, what it means, and what we can do about it. The mis-leaders are the media and the self-styled pundits who spin the attacks into some vague obfuscation. Trump is one of the spinmeisters, of course. But the US corporate media are also complicit propagandists. US media has erased this history, which I have merely scratched the surface of, and continues to do so daily. It does not investigate the real crime of 9/11 but seeks to provide enough blustering emotionalism to suffice, so that the public doesn’t get suspicious and supplant the propagandists. Media relies on a lazy, apathetic public that isn’t prodded into acting and investigating for itself. It wants couch potatoes who long to be told what to think, and more importantly what not to think.

So we get the silly blame game. Trump’s xenophobic anti-immigrant Jihad would have stopped 9/11! Jeb’s brother was keeping us safe! What irrelevant blather.

The people who actually know about the 9/11 attacks, people like Senator Graham, Paul Thompson, who created the Complete 9/11 Timeline, and former Underwriters Laboratories engineer Kevin Ryan, are the ones to listen to. Something’s rotten in Washington, so rotten that the media dare not even hint of it. That something is high treason, an ongoing crime with no statute of limitations. US officials need to be prosecuted for their malfeasance. If prosecutions moved forward, the entire plot would unravel like a house of cards tumbling to the table.

If America has any self-respect remaining at all it will demand justice, the immediate release of the 28 pages on Saudi sponsorship of the attacks, and a new government that actually defends the nation instead of using attacks as a deliberate plan to expand the empire and increase profits.

That “new Pearl Harbor,” and associated strategy, from the Project for a New American Century, is quite real and proceeds to this day. It has a bipartisan consensus, and the goal is control of the world’s resources. If that’s not motive enough, then I’m not sure what else I can tell you.

Joe Giambrone is editor of Political Film Blog, author of Hell of a Deal: A Supernatural Satire and Transfixion, a young adult science fiction thriller.

Disinformation Killed 9/11 “Truth” (also by Joe Gambrione)
Sarasota and the 9/11 Hijackers: On the FBI hiding 80,000 pages, on Sarasota Connections, and Saudis in Sarasota.