Home CIA Why Americans Don’t Understand Terrorism, At All

We live in an invisible empire, and so the mechanics of the empire are never openly discussed with the rabble. Americans don’t comprehend how power actually works across the planet that their country seeks to control. They live from momentary headline to headline without any honest, in-depth analysis of why events like the Manchester bombing occur and keep occurring.

When it comes to terrorism it is dire, urgent, and desperate that the public understand, if anything is to change. But it certainly appears that Americans never will. Perhaps Britons may, and then lead the effort to stop it.

Their message to us was ‘We’ve created this movement, and we can control it.’ It’s not that we don’t want the Salafis to throw bombs; it’s who they throw them at—Hezbollah, Moqtada al-Sadr, Iran, and at the Syrians, if they continue to work with Hezbollah and Iran.”
-Seymour Hersh, The Redirection, 2007

In the United States, a bigoted faction demonizes all Muslims. That faction calls for more weapons and for their own wanton terror to be perpetrated everywhere. An opposing faction absolves all Muslims and calls for peace and reconciliation… with suicide bombers? The two sides mindlessly shout clichés back and forth at one another in a cacophony, and they drown out the larger global issues that have transpired for many years. The public is thus rendered impotent, irrelevant and ignored: divided and conquered.

Gross historical ignorance leads to this inability to see what should be glaringly obvious: the deep state—covert intelligence agencies operating in secret—play a “double game.” They are in bed with terrorists, whom they see as useful proxies. The terrorists do their dirty work for them in places like Libya, Syria, Chechnya and Dagestan.

Americans are largely incapable of comprehending what a proxy is. It’s one level too abstract. Ask people on the street about such matters, and the results would be akin to the 64% who cannot even find North Korea on a map. Korea’s location is in no way a secret, and the government doesn’t officially deny its existence.

The corporate media has been criminal in distracting the public from the role of western allied intelligence agencies in these terror games. Despite the decade-long Afghanistan Jihad against the Soviets, the similarities of multiple current conflicts do not make it onto the evening news shows. This default censorship extends into so-called “alternative” media too. There is an unspoken air of collusion with intelligence in the United States. Some matters, for example Operation Gladio, are simply never, ever brought up. That chapter has been tossed down Orwell’s Memory Hole.

“a war fought between groups or smaller countries that each represent the interests of other larger powers, and may have help and support from these.”

Al Qaeda has been a proxy for US, Saudi and Pakistani interests since at least 1979, when Jimmy Carter’s CIA began aiding them and setting up the largest logistical support network in its history: Operation Cyclone. While official government claims mislead the public into assuming that the relationship ended in the late 1980s, it did not.

Al Qaeda maintains relationships with US allies, notably Saudi Arabia and Pakistan (where bin Laden lived for a decade and Ayman Zawahiri is assumed to be right now). Other states in the Persian Gulf region such as Qatar, Kuwait and Turkey are also implicated. These nations receive US arms and US protection. Although they are repeatedly exposed for aiding and abetting Al Qaeda and associated groups operating under various names, these countries are tolerated and rewarded by US administrations and other Western powers

This absurdity can only continue because of the gross ignorance and the distractibility of western populations.

The Manchester bombing produced some uncharacteristically revealing news reports in the UK, but these are censored to US audiences. US media is more tightly controlled, apparently, when it comes to the shenanigans of western intelligence services protecting terrorists. 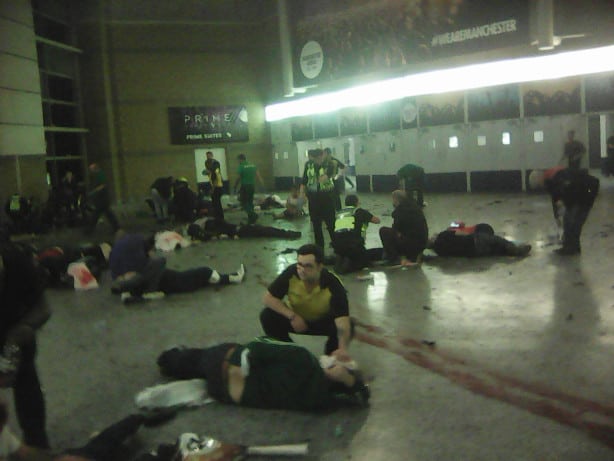 Here is what we learned about Manchester:

One of the friends who called the anti-terrorism hotline about one of the London Bridge attackers said, “’He was not arrested and was allowed to keep his passport. I did my bit, I know a lot of other people did their bit, but the authorities did not do their bit.”

Previously, and related, a radical Muslim cleric named Anjem Choudary was protected from arrest by MI5 for nearly twenty years!

“Met counter-terror officers often felt they enough evidence to build a case against the radicalising cleric, only to be told to hang fire by MI5, because he was crucial to one of their on-going investigations, a source has claimed… After almost 20-years at the forefront of radical Islam in Britain, Choudary was finally convicted of a terrorism offence last month and faces up to ten years in prison when he is sentenced on September 6. But following his conviction it was revealed that the 49-year-old former lawyer had been linked to at least 15 terror plots dating back as far as 2001.”

Needless to say, those five warnings flagging Manchester bomber Salman Abedi were completely ignored by authorities—for some reason. This is very similar to the warnings about the Tsarnaev Brothers in 2013. The pattern is almost identical to the Boston Marathon Bombing.

Russia sent the FBI two warnings about the Tsarnaevs including one that was ignored after Tamerlan met with a known extremist guerrilla leader in Dagestan. Israel’s DEBKAFile suggested at the time that the Tsarnaevs were being recruited by US intelligence to go stir up trouble in the Russian provinces of Chechnya and Dagestan. This was confirmed by Michele McPhee in her recent book Maximum Harm: The Tsarnaev Brothers, the FBI, and the Road to the Marathon Bombing.

Warnings were ignored, systematically, in both cases. Numerous warnings were also ignored concerning the 9/11 attacks, and for similar reasons. FBI chief division counsel Coleen Rowley explained in painstaking detail how her efforts to stop the 9/11 attacks were blocked by her own headquarters.

“Within days of terrorist suspect Zaccarias Moussaoui’s arrest in Minnesota on Aug. 16, 2001, French intelligence confirmed that Moussaoui had been fighting under and recruiting for [Chechen Al Qaeda leader] Ibn al-Khattab, raising concerns about Moussaoui’s flight training. Yet FBI Headquarters officials balked at allowing a search of his laptop and other property, still refusing to recognize that: 1) the Chechen separatists were themselves a “terrorist group” for purposes of the Foreign Intelligence Surveillance Act’s (FISA) legal requirement of acting “on behalf of a foreign power” and 2) that Moussaoui’s link to Ibn al Khattab inherently then linked him to bin Laden’s well-recognized Al Qaeda group for purposes of FISA (the point in my memo).”

The Minnesota FBI agents were thwarted from investigating Moussaoui’s intelligence, and it remained untouched when hijacked planes crashed into the World Trade Center and Pentagon a month later.

Those are three clear examples of interference in the fight against terrorism on western soil. A fourth example is the Berlin 2016 Christmas attack, which killed 12 and injured 56 others. “The attack was carried out by a man whom security officials across Germany were very well aware of,” according to the Interior Minister Ralf Jäger. Anis Amri was investigated seven times before striking, and yet officials claimed that nothing could be done about him. The public is to believe that the entire law enforcement and intelligence apparatus of Germany is powerless against one man. Police knew prior to his attack that he had traveled through Germany under 14 different aliases.

Newsbud compiled a timeline to dispute the claims of German officials:

26 September 2016:
Tunisian and Moroccan security authorities inform the North Rhine-Westphalia LKA that Amri is an Islamic State supporter, that he is in contact with suspected Tunisian terrorists in Libya, “wants to carry out a project” in Germany and is staying in Berlin. German authorities receive similar information on October 14 and October 26.

Coincidentally, that December, German intelligence produced a report that “10,000” Salafists were living in Germany. The report pointed the finger at Saudi Arabia, Qatar and Kuwait for their direct funding and support to “mosques, religious schools,” and “hardline preachers.”

The corporate media in the US today is a cacophony of irrelevant distraction. There, 99% of what is broadcast about terrorist attacks is completely unrelated to why it actually happened or how to stop it from happening again. TV news serves only as propaganda and does not inform its viewers of these otherwise knowable facts above.

The public would be far more attuned to these security breaches, and the impunity which surrounds them, if they understood modern history, and particularly the history since 1948 with the creation of the CIA and the “National Security State.” Soon after, we have it on the record, that the CIA began engaging in false-flag terrorism. It was a key component of Operation Ajax, the criminal plot to overthrow the democratically elected president of Iran.

“The [CIA’s own] history says agency officers orchestrating the Iran coup worked directly with royalist Iranian military officers, handpicked the prime minister’s replacement, sent a stream of envoys to bolster the shah’s courage, directed a campaign of bombings by Iranians posing as members of the Communist Party, and planted articles and editorial cartoons in newspapers.” (emphasis added)

Upon this “success,” the destruction of Iranian democracy and the installation of a murderous tyrant, the Central Intelligence Agency was thus encouraged to engage in more anti-communist false-flag attacks. That was Operation Gladio, a “forty year” spree of state-sponsored terrorist attacks across Europe, according to the BBC investigation.

Clearly we should be listening to meticulous experts like Dr. Nafeez Ahmed, rather than the barrage of talking heads who obfuscate on CNN. The Strategy of Tension persists and is the conceptual foundation of the perpetual “War on Terrorism.”

“The ‘strategy of tension’ denotes a highly secretive series of interconnected covert operations conducted jointly by the CIA and MI6 largely in Western Europe during this period. Well-documented by several respected historians, confirmed by official inquiries, and corroborated by former intelligence officials, the ‘strategy of tension’ is one of those unsavoury moments in contemporary history that we don’t learn about in school, or even university… The objective was to galvanize public opinion against leftwing policies and parties, and ultimately to mobilize popular support for purportedly anti-Soviet policies at home and abroad – most of which were really designed to legitimize brutal military interventions against nationalist independence movements in the ‘Third World’.”

Terrorism serves those who would destroy civil liberties at home and wage wars of aggression abroad. Attacks on random civilians have been allowed to proceed, and the efforts of lower-level law enforcement officers halted in their tracks, over and over again in multiple allied nations. That is the main reason we see repeated high-profile attacks perpetrated by people who are well-known to the security-intelligence complexes that are supposed to stop them but choose not to.