Will November 2008 bring a meaningful change to America? Will getting rid of George W. Bush and Richard Cheney without impeachment or indictment really make a difference? Will a 600 billion dollar war/defense budget be cut in half and used for desperately needed domestic spending? Will the ninety-three billion dollars profits in the private health insurance companies­­—those parasitic intermediates between you and your doctor—be used instead for full health care coverage for all? Will Habeas Corpus and Posse Comitatus be restored to the people? Will torture stop? Will all students in public universities be able to enroll for free? Will the US national security agencies stop mass spying on our personal communications? Will the neo-conservative agenda of total military domination of the world be reversed?

The answer to these questions in the context of the current billion dollar presidential campaign is an absolute no. Instead we have a campaign of personalities and platitudes. There is a race candidate, a gender candidate and a tortured veteran candidate, each talking about change in America, national security, freedom, and the American way. The candidates are running with support of political parties so deeply embedded with the military industrial complex, the health insurance companies, Wall Street, and corporate media that it is undeterminable where the board rooms separate from the state rooms.

The 2008 presidential race is a media entertainment spectacle with props, gossip, accusations, and public relations. It is impression management from a candidates’ perspective. How can we fool the most people into believing that we stand for something? It is billions of dollars of gravy for the media folks and continued profit maximunization for the war machine, Wall Street, and insurance companies no matter who is determined the winner in November.

We must face the fact that the US government’s primary mission is to protect the wealthy and insure capital expansion worldwide. The US military—spending more than the rest of the militaries of the world combined—is the muscle behind this protect-capital-at-all-costs agenda, and will be used against the American people if deemed necessary to support the mission.

The two party corporate political system is having a HOMELAND presidential campaign—Hillary, Obama, McCain, Election, Lacking, Actual, National, Debate. It is time for real change, but it will only come with a social movement of reform in the tradition of the progressive, labor, civil rights, anti-war movements of the last century. We need to use all of our activist, legal, and political resources to reverse these threats to freedom. Naomi Wolf says it is not too late to prevent totalitarianism, but we have to act fast.

Peter Phillips is a Professor of Sociology at Sonoma State University and director of Project Censored. Access to verifying facts and analysis for the issues mentioned above is available at www.projectcensored.org. 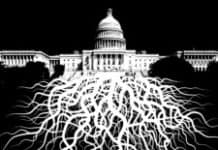 The CIA in Kuwait: Parallels to a 9/11 Suspect

Harry Belafonte Questions 9/11 And Asks Us To Redefine Terror