At 7:30 a.m. this morning, they climbed a nine-foot fence to occupy a 35-foot-high
ledge at the National Archives. 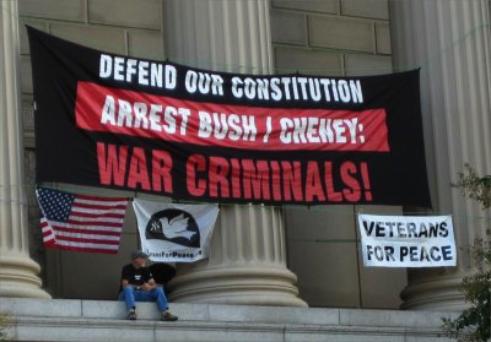 And five members of the Veterans for Peace organization have been there ever
since. They say they’re veterans of Vietnam and Iraq, anti-war activists, and
soldiers for a cause who plan to fast for 24 hours in protest of the Bush administration.

Seeking the criminal prosecution of George W. Bush and Dick Cheney, the organization
distributed “Citizens’ Arrest Warrants” to tourists waiting in line
to enter the archives, which houses the key documents of U.S. history: the Declaration
of Independence, the Constitution and the Bill of Rights.

In a press release, the group described the reasons for its protest:

Bush and Cheney’s serial abuse of the law of the land clearly marks
them as domestic enemies of the Constitution. They have illegally invaded
and occupied Iraq, deliberately destroyed civilian infrastructure, authorized
torture, and unlawfully detained prisoners. These actions clearly mark them
as war criminals. Accountability extends beyond impeachment to prosecution
for war crimes even after their terms of office expire….

We are not conducting ourselves in a disorderly manner; our action is well-ordered
and well-considered. We are not trespassing; we have come to the home of our
Constitution to honor our oath to defend it.

So far, authorities have not interfered with the peaceful protest or the sign.

Yes, there’s a sign. A 22-foot-by-x8-foot banner draped across the Constitution
Avenue side of the archives says, “DEFEND OUR CONSTITUTION. ARREST BUSH
AND CHENEY: WAR CRIMINALS!”

From the Veterans for Peace site:

* Update * The five members of VFP stayed on the ledge for the planned 24
hours. They safely got down 8:30am Thursday morning. Read
the Arrest Warrant they were handing out to passers by.