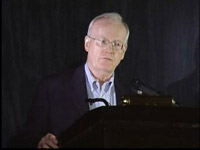 Holes
in the story
By Robert Plain
Ashland Daily Tidings

Six years have passed since the events of Sept. 11, 2001. So to have several
governmental explanations, a 9-11 bipartisan commission, which released an official
report, to address the unanswered questions that hang over what the U.S. government
has classified as a terrorist attack on the World Trade Center and the Pentagon
that memorable September morning.

Still, Ashland residents, and a growing number of American citizens, still
have unanswered questions. Ashland residents, perhaps more so than the nation
as a whole, aren’t satisfied with the official account, or the lack thereof,
about these events.

A recent Scripps Howard poll showed that more than a third of the American
public suspects that federal officials assisted in the 9/11 terrorist attacks
or took no action to stop them. An unscientific poll conducted on the Tidings’
Web site indicated that 44 percent of responders don’t believe the official
story, or think the U.S. government was involved in planning the attacks.

“There’s something really wrong with this picture,” said Ken Becker,
who founded an Ashland-based organization seeking the truth about what happened
on Sept. 11. “The official conspiracy theory is so filled with holes. So
what’s the truth?”

Becker, the self-appointed leader of the local 9-11 truth movement, thinks
it was an inside job, planned and executed by Vice President Dick Cheney and
his neo-conservative cohorts in the White House.

“This isn’t new, it isn’t unfathomable. It isn’t even unreasonable,”
Becker said. “But still a huge percentage of Americans still believe their
government would never do them wrong.”

According to Becker, a significant number of their constituents think like
he does. He has an e-mail list with “a couple hundred” people from
Ashland on it.

“I’m not telling anyone what to believe,” he said. “Do your
own research.”

John Fisher-Smith is an active member of the Ashland community. Fisher-Smith
studied architecture in college, where he took classes in civil engineering.

“I’m certain that the World Trade Center buildings were demolished by
some other means than an aircraft,” he said. “The nature of [construction]
steel is that when it bends it gets stronger. Those buildings exhibited brittle
behavior.”

“Just about everyone I talk with suspects something fishy happened,”
she said. “I know it’s horrifying to think about, but it’s even more horrifying
not to think about it.”

The Fisher-Smiths believe the attacks were staged so that the White House “has
an excuse to take all these actions.” They listed the wars in Iraq and
Afghanistan, the Patriot Act, torture and a worldwide war on the nebulous notion
of terror.

“We need answers,” she said. “I’m not willing to say the administration
planned it, but why doesn’t it all add up. I think it’s possible we allowed
it to happen to give us an excuse to invade Iraq.”

She said she knows many locals who think like she does.

“Everybody in my book club,” she said, of which there are 12 other
members. “I probably know more than 30 people who don’t buy the official
story.”

Spencer said Ashland has a high percentage of people who question the official
account of Sept. 11 because “Ashlanders spend more time reading than they
do watching ‘American Idol.'”

Harriett Rex Smith, a well-known Ashland painter who questions the official
account, thinks the reason Ashlanders are so likely to doubt the official account
is because Ashland attracts free-thinkers.

“The beauty of this place has attracted a lot of creative people,”
she said. “Creative people are open-minded.”

Smith has a master’s degree from Notre Dame University, and has taught at Purdue
and Indiana Universities. But some think she’s taken the issue too far.

“My own family thinks I’m obsessive about this,” she said. “I’m
not a conspiracy theorist, but I believe the government itself entered into
some sort of conspiracy. Other countries told us that there were going to be
attacks. There must have been complicity at some level.”

Not anymore. Since then, the theologian and former college professor who will
speak in Ashland on Thursday night has become the one of the foremost names
in the 9-11 truth movement, the loose association of people who don’t believe the U.S. government’s account of what happened on 9/11.

Griffin will be in Southern Oregon University’s Britt Ballroom at 7 p.m. Thursday to present a lecture on what he, and others, believe really happened that fateful September morning. Tickets cost $10; $5 for students. The talk is entitled, “Debunking the 9/11 Debunking.”

“Putting aside all of his work in theology, Prof. Griffin then devoted himself to writing ‘The New Pearl Harbor,’ a devastating book with detailed footnotes which systematically presents a powerful account questioning the official story of 9/11,” according to wanttoknow.info.

Since that time, Griffin has authored five additional books on Sept. 11, from his theories on why planes could not have taken down the World Trade Center buildings, to how the religious community should react to the possibility of a government cover-up.

His supporters adamantly insist that he has debunked the U.S. government’s version of 9-11.

Griffin believes there should be a full investigation into the events that transpired that day. In his books and lectures, he asserts that the U.S. government may be responsible for 9/11. He asserts that a number of facts and circumstantial evidence seem to point in that direction. Griffin believes the World Trade Center buildings were brought down by explosives planted in the towers prior to planes flying into them, ensuring their destruction.

“High-rise steel-frame buildings have never — before or after 9/11 — been caused to collapse by fire,” he has said. “There were many features that suggest that the buildings were brought down deliberately through the method that’s known as controlled demolition.”

The Washington Post dubbed Griffin, professor emeritus at Claremont University’s School of Theology, the leader of the “academic wing” of the 9-11 Truth Movement.

But he does have his detractors in the movement for more answers.

Chip Berlet, a senior analyst at Political Research Associates, a left-leaning think tank, believes there should be a more thorough investigation of Sept. 11 that would likely lead to indictments of military and civilian officials. On the popular radio program Democracy Now!, he said Griffin tends to distort opinions and conjecture as facts and irrefutable truth.

Griffin responded on the program, which aired on May 26, 2004, that he is not purporting to know what actually happened.

“I’m, rather, showing that [the mainstream] theory is full of problems,” he said.