Gas station owner Harvey Pollack says he’d probably
lose about $1,500 by shutting off his pumps for a day. 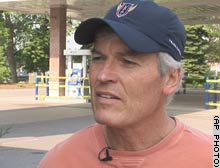 MEQUON, Wisconsin (AP) — Motorists pulled in to Harvey Pollack’s gas station, honked and gave him a thumbs-up — because he wasn’t selling any fuel.

The owner of Towne Market Mobil in this suburb north of Milwaukee shut down his pumps for 24 hours, hoping to start a movement aimed at convincing oil companies to lower their prices.

“Somebody out there is making money at these prices, but not me,” said Pollack, 57. “So I just thought: What can I do to help the consumer?” (Watch the finger pointing over soaring gas prices video)

Yellow caution tape surrounded Pollack’s six idle pumps for his protest, which drew dozens of drivers. One in a green minivan rolled down her window and shouted “Thank you!”

Maria McClory, 38, drove 10 miles out of her way to buy a diet soda from Pollack’s station after seeing local television coverage of the protest.

“I just wanted to support them and thank them for making a statement,” said McClory, who drives about 100 miles a day for work in her sport utility vehicle.

Other drivers were more skeptical.

Jeff Bensman, 52, pulled in expecting to gas up his Honda sedan. He said he appreciated the protest but did not think it would make much difference.

“Most other places are going to be open in the area,” he said.

Jack Sobczak, general sales manager for Lakeside Oil Co., a contracted Mobil distributor that supplies Pollack’s station, said Bensman was probably right: “The demand will just move down the street to the next Mobil station.”

“Somebody’s got to be the first to try this,” Schwartz said.

The Mequon station sells about 3,500 gallons of gas a day, Pollack said. He estimated the station would lose only $1,500 on the protest because some losses in gas would be made up by people buying convenience store items or more gas on Friday.

Pollack, who also owns a Milwaukee title insurance agency, said he bought the gas station in 2003 as an investment but he has not turned a profit in 30 months because gas margins are razor thin and he cannot sell enough volume to compensate.

Pollack said he has virtually no control over the price he charges for gas. The company usually makes 8 to 12 cents per gallon after suppliers’ prices and credit card fees. On Wednesday — the day before the protest — that added up to $3.49 for a gallon of unleaded gas. (Watch what you can do to save at the pump)

Schwartz called that “outrageous” and said even he can’t fill up his SUV at that price.

“If it keeps going like this, my kids will never be able to afford to drive,” said Schwartz, who has an 18-year-old son and 15-year-old daughter.

The protest came as several Wisconsin service stations announced they would no longer sell gas because they make little or no profit on it after they pay wholesalers, credit card fees and taxes. They said they would focus on auto repairs instead.