Was it an inside job?

September 11 conspiracies will go mainstream on Sunday as BBC
airs an hour long documentary
(article below) that investigates the growing
number of conspiracy theories surrounding the 9/11 attacks.

9/11: The Conspiracy Files, will try to answer the question that has
been doing the rounds on the Internet ever since the hijacked planes crashed
into the twin towers of the World Trade Center: “Is it an inside job?”

According to the BBC, investigators have travelled across the United States
speaking to eyewitnesses trying to separate fact from fiction.

The programme produced by Guy Smith raises another important question: “Why
was America so unprepared when terror attack warnings had been received?”

According to a Scripps Howard poll, 36% of 1,010 Americans believe that the
government is responsible for the attacks either by omission or by commission.

The official 9/11 commission report concluded that “there were specific
points of vulnerability in the plot and opportunities to disrupt it.

“The outrage caused by September 11th allowed the present administration
to instantly implement policies its members have long supported, but which were
otherwise infeasible,” according to the main conspiracy website, 911Truth.org,
which receives thousands of visitors every day. “9/11 was exploited to
launch an open-ended, perpetual “war on terror,” actually a war against
any and all enemies the US government may designate. The case of Iraq shows
that the target countries of this war need have nothing whatsoever to do with
9/11.” 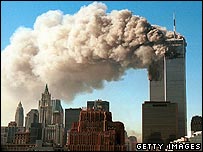 The Conspiracy Files investigates the growing number of conspiracy theories
surrounding the 9/11 attacks.

Incredibly some believe the American Government allowed or actively helped
the attacks on the World Trade Centre and the Pentagon.

Those who question the official version believe the World Trade Centre buildings
were actually demolished by explosives; others ask why there was so little damage
to the Pentagon’s outer wall if a plane really had hit it.

And why was America so unprepared when terror attack warnings had been received?

The Conspiracy Files travels across the United States to investigate, speaking
to eye witnesses and tries to separate fact from fiction.

Excellent BBC Documentary The
Power of Nightmares. This program should be watched by everyone, aired
January, 2005, now online at Google video: Part
1 Part
2 Part
3