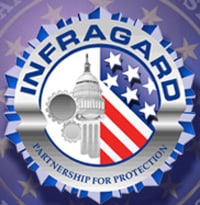 Today, more than 23,000 representatives of private industry are working quietly with the FBI and the Department of Homeland Security. The members of this rapidly growing group, called InfraGard, receive secret warnings of terrorist threats before the public does–and, at least on one occasion, before elected officials. In return, they provide information to the government, which alarms the ACLU. But there may be more to it than that. One business executive, who showed me his InfraGard card, told me they have permission to “shoot to kill” in the event of martial law.
InfraGard is “a child of the FBI,” says Michael Hershman, the chairman of the advisory board of the InfraGard National Members Alliance and CEO of the Fairfax Group, an international consulting firm.

InfraGard started in Cleveland back in 1996, when the private sector there cooperated with the FBI to investigate cyber threats.

“Then the FBI cloned it,” says Phyllis Schneck, chairman of the board of directors of the InfraGard National Members Alliance, and the prime mover behind the growth of InfraGard over the last several years.

InfraGard itself is still an FBI operation, with FBI agents in each state overseeing the local InfraGard chapters. (There are now eighty-six of them.) The alliance is a nonprofit organization of private sector InfraGard members.

[Remainder of article at The Progressive.]