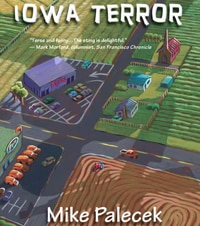 This just in …”Iowa Terror” will be featured on Pacifica Radio

Terror … in a small town.

We are watching everyone … but the ones we should.

Meet Jesus Iowa. He’s a teen from Oaxaca whose family moves to a small Iowa town. Athlete and worker, Jesus leaves his home in the U.S. heartland after the Sept. 11 terrorist attacks on the East Coast. That move partly heats up his community’s fears and hopes in Iowa Terror (Seventh Street Press, 2007), Mike Palecek’s latest novel.

His narrative voices both echo and skewer the White House of George W. (MD) Bush and the kind of patriotism it seeks to spread across the U.S. This is an ambitious and difficult approach. But Palecek pulls it off with his sharp ear for the everyday language of rural folks swept up in a political and reportorial culture of apparently endless war for liberty and security. In that respect, he reminds me a bit of U.S. author Joe Bageant, who has a finger on the working-class culture of some white folks who live in Virginia and West Virginia.

A former journalist for small Midwest newspapers, Palecek’s grasp of character, place, and time impresses. In 15 concise and big format chapters, he sketches intriguing portraits of fictional Iowans as they hang laundry, judge sheep, and swim, ever keen to orange-coded security alerts to repel the official terrorists, the non-white Others who are out there threatening the American people.

Along the way, sympathetic images of the hunters and hunted emerge. In Palecek’s story their dialogue flashes with unintended hilarity, then swoons with a heart-rending humility. One plot twist features the politics of North America’s first inhabitants, generations removed from European invasion and dispossession. Who tells past and present tales of terror matters in the hands of the author, who has done prison time for being a war resister. He is no arm-chair observer of our times.

In my view, a key virtue of Palecek’s book is to give readers, notably youth, a fictional entry into critical thinking on peace and war. And to do this with little pedantry is no small feat in a nation fed a 24/7 capitalist storm of business and war claptrap. The vibrant color illustrations of four talented artists — Russell Brutsche, Allison M. Healy, Benjamin Heine and Ian Ward — illuminate Iowa Terror.