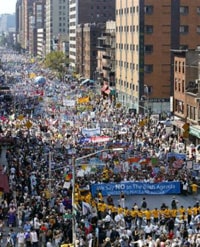 (Please see UPJ website for all links, details of all following events.)

MARCH 18-20: GLOBAL DAYS OF PROTEST
ON THE TWO-YEAR ANNIVERSARY OF THE IRAQ WAR
* End the War *
* Bring the Troops Home Now *
* Rebuild Our Communities *

March 18-20 marks the two-year anniversary of the U.S. bombing and invasion of Iraq. At least 765 U.S. towns and cities, in all 50 states are holding anti-war events – more than double the number of anti-war actions on the first anniversary of the war last year.

LOCAL ACTIONS NATIONWIDE
Supporters of peace and justice in every corner of the country, in communities large and small, will be organizing local protests against the war through the weekend. The unprecedented number and geographic spread of these events reflect the growing breadth of U.S. peace organizing, which is reaching into more communities than it ever has. A majority of Americans now agree with the peace movement that the Iraq War was a mistake.

VETERANS AND MILITARY FAMILIES CALL FOR THE TROOPS TO COME HOME NOW
Many of the events throughout the country will feature veterans and family members of active-duty soldiers speaking out against the war. In Fayetteville, NC, military families and veterans have been central to organizing what promises to be an extraordinary mobilization, which UFPJ is strongly supporting. Fayetteville is home to Fort Bragg – ground zero for the 82nd Airborne Division and many of the Army’s elite units. This weekend’s event may be the largest demonstration ever to take place in the area.

COUNTER-RECRUITMENT AND CIVIL DISOBEDIENCE PROTESTS AROUND THE U.S.
There will be numerous protests outside military recruitment centers, to counter the predatory targeting of youth by the U.S. armed forces, in places ranging from Tucscon, Arizona to Springfield, Missouri to Williston, Vermont. And there will be an array of nonviolent civil disobedience actions across the country, many as part of a new National Campaign of Nonviolent Resistance Against the War in Iraq.

UPSURGE IN FAITH-BASED ORGANIZING AGAINST THE WAR
This weekend will also mark the formal launching of Clergy and Laity Concerned About Iraq. Nurtured by United for Peace and Justice, this new national faith-based network is focusing on the immorality of the war and occupation. Visit www.unitedforpeace.org/faith for highlighted events and more information.

GLOBAL ANTI-WAR PROTESTS
People all around the world will be taking action against the war on March 18-20 as well. In January, the World Social Forum in Porto Alegre, Brazil, endorsed the call for anniversary protests. Responding to a call from the European Social Forum’s Assembly of Social Movements, European activists are organizing national mobilizations across Europe. Brussels will be the site of a central demonstration on the eve of a meeting of the European Council, where demonstrators will march against war, racism, and a corporate-dominated Europe. India’s national Anti-War Assembly is planning major protests on the second anniversary of the war.