The President of Mexico has an unfortunate message for Americans still ignorant of the Drug War’s cold realities: Some of your politicians are involved. 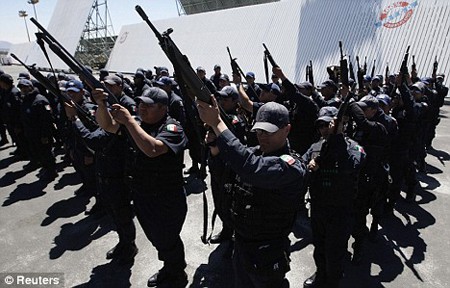 Yes folks, it is long-past time to start thinking about alternative strategies for combating both the harmful effects of drug addiction and the deadly effects of forcing an economy outside of the law.

“It is impossible to pass tons of drugs and cocaine to U.S. without some great complicity of some American authorities,” said Mexican President Felipe Calderone.

Calderone’s comments come at 3:01 in the following video.

Carlos Slim, the Mexican billionaire whose $250 million cash infusion bailed the New York Times out of a tight cash crunch last week, has long-standing business ties with wealthy Mexican businessmen suspected of involvement in Mexico’s so-called “Cartel of the Southeast,” the drug trafficking organization (DTO) based in Cancun which came to light two years ago with the crash on Mexico’s Yucatan Peninsula of an American-registered (N987SA) Gulfstream jet carrying nearly four tons of cocaine.

A long-time lieutenant of Carlos Slim’s, Fernando Chico Pardo, left Slim’s employ to take over ASUR, a publicly-traded corporation which observers accuse of moving large quantities of cocaine through Cancun International Airport, which the company runs and manages. Slim’s big investment represents an encroachment into the ownership of an icon of American democracy of a man, and a massive fortune, whose provenance have gone largely unexamined.

But on the topic of Slim’s shady dealings, all eyes seem to be curiously averted. However it seems highly doubtful the Times’ ownership is unaware of them. The barely-concealed facts regarding Carlos Slim’s shady connections are well-known to journalists in Mexico.

They deserve to become more well-known here in the U.S.; the links between Mexico’s exploding narco-economy and current-world’s-richest-man Carlos Slim don’t end with Fernando Pardo’s ASUR. …

Mar 20, 2009-Another owner of the flight school in Venice Florida that trained Mohamed Atta and Marwan Al-Shehhi to fly is in trouble with the law; current owner Arthur G. Nadel, 75, was arrested recently for running a Ponzi scheme which methodically looted investors in his Sarasota-based hedge funds of more than $300 million.

Nadel’s arrest marks the second time in recent years that the owner of Huffman Aviation, the FBO (fixed base of operations) at the Venice Airport has been involved in crimes traditionally associated with the Mob. …

35-year old Guyanese pilot Michael Francis Brassington was indicted in New Jersey federal court this week, the result of an investigation into the spectacular crash of a airplane outside New York City in February of 2005, which injured 20 people and provoked widespread outrage in New York.

Brassington, the principal owner of defunct air charter company Platinum Jet Management, was indicted Wednesday along with four other company executives, charged with recklessly endangering the lives of passengers. He has survived previous scrapes with American law enforcement, each time emerging curiously unscathed. …

The pilot arrested two weeks ago on felony charges in the crash in the February 2005 crash of a Challenger business jet at Teterboro Airport in New Jersey has since been flying illegal charters for the Premier of the Turks & Caicos in luxury Gulfstream III jets owned by a Washington lobbyist and former aide to President Bill Clinton.