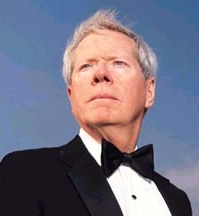 Thom
Hartmann began his program on Thursday by reading from a new Executive Order
(Ed. Full text at end)which allows the government to seize the assets
of anyone who interferes with its Iraq policies.

He then introduced old-line conservative Paul Craig Roberts — a former Assistant
Secretary of the Treasury under Reagan who has recently become known for his
strong opposition to the Bush administration and the Iraq War — by quoting
the “strong words” which open Roberts’ latest
column: “Unless Congress immediately impeaches Bush and Cheney, a year
from now the US could be a dictatorial police state at war with Iran.”
(Ed. Posted here previously)

“I don’t actually think they’re very strong,” said Roberts of his
words. “I get a lot of flak that they’re understated and the situation
is worse than I say. … When Bush exercises this authority [under the new Executive
Order] … there’s no check to it. It doesn’t have to be ratified by Congress.
The people who bear the brunt of these dictatorial police state actions have
no recourse to the judiciary. So it really is a form of total, absolute, one-man
rule. … The American people don’t really understand the danger that they face.”

Roberts said that because of Bush’s unpopularity, the Republicans face a total
wipeout in 2008, and this may be why “the Democrats have not brought a
halt to Bush’s follies or the war, because they expect his unpopular policies
to provide them with a landslide victory in next year’s election.”

However, Roberts emphasized, “the problem with this reasoning is that
it assumes that Cheney and Rove and the Republicans are ignorant of these facts,
or it assumes that they are content for the Republican Party to be destroyed
after Bush has his fling.” Roberts believes instead that Cheney and Rove
intend to use a renewal of the War on Terror to rally the American people around
the Republican Party. “Something’s in the works,” he said, adding
that the Executive Orders need to create a police state are already in place.

“The administration figures themselves and prominent Republican propagandists
… are preparing us for another 9/11 event or series of events,” Roberts
continued. “Chertoff has predicted them. … The National Intelligence
Estimate is saying that al Qaeda has regrouped. … You have to count on the
fact that if al Qaeda’s not going to do it, it’s going to be orchestrated. …
The Republicans are praying for another 9/11.” [Lew Rockwell Grieg]

Hartmann asked what we as the people can do if impeachment isn’t about to happen.
“If enough people were suspicious and alert, it would be harder for the
administration to get away with it,” Roberts replied. However, he added,
“I don’t think these wake-up calls are likely to be effective,” pointing
out the dominance of the mainstream media.

“Americans think their danger is terrorists,” said Roberts. “They
don’t understand the terrorists cannot take away habeas corpus, the Bill of
Rights, the Constitution. … The terrorists are not anything like the threat
that we face to the Bill of Rights and the Constitution from our own government
in the name of fighting terrorism. Americans just aren’t able to perceive that.”

Roberts pointed out that it’s old-line Republicans like himself, former Reagan
associate deputy attorney general Bruce Fein, and Pat Buchanan who are the diehards
in warning of the danger. “It’s so obvious to people like us who have long
been associated in the corridors of power,” he said. “There’s no belief
in the people or anything like that. They have agendas. The people are in the
way. The Constitution is in the way. … Americans need to comprehend and look
at how ruthless Cheney is. … A person like that would do anything.”

Roberts final suggestion was that, in the absence of a massive popular outcry,
“the only constraints on what’s going to happen will come from the federal
bureaucracy and perhaps the military. They may have had enough. They may not
go along with it.”

The full audio of Thom Hartmann’s interview with Paul Craig Roberts can be
found
here.

For Immediate Release
Office of the Press Secretary
July 17, 2007

Section 1. (a) Except to the extent provided in section 203(b)(1), (3), and
(4) of IEEPA (50 U.S.C. 1702(b)(1), (3), and (4)), or in regulations, orders,
directives, or licenses that may be issued pursuant to this order, and notwithstanding
any contract entered into or any license or permit granted prior to the date
of this order, all property and interests in property of the following persons,
that are in the United States, that hereafter come within the United States,
or that are or hereafter come within the possession or control of United States
persons, are blocked and may not be transferred, paid, exported, withdrawn,
or otherwise dealt in: any person determined by the Secretary of the Treasury,
in consultation with the Secretary of State and the Secretary of Defense,

(i) to have committed, or to pose a significant risk of committing, an act
or acts of violence that have the purpose or effect of:

(A) threatening the peace or stability of Iraq or the Government of Iraq; or

(B) undermining efforts to promote economic reconstruction and political reform
in Iraq or to provide humanitarian assistance to the Iraqi people;

(ii) to have materially assisted, sponsored, or provided financial, material,
logistical, or technical support for, or goods or services in support of, such
an act or acts of violence or any person whose property and interests in property
are blocked pursuant to this order; or

(iii) to be owned or controlled by, or to have acted or purported to act for
or on behalf of, directly or indirectly, any person whose property and interests
in property are blocked pursuant to this order.

Sec. 2. (a) Any transaction by a United States person or within the United
States that evades or avoids, has the purpose of evading or avoiding, or attempts
to violate any of the prohibitions set forth in this order is prohibited.

(b) Any conspiracy formed to violate any of the prohibitions set forth in this
order is prohibited.

Sec. 3. For purposes of this order:

(a) the term “person” means an individual or entity;

(b) the term “entity” means a partnership, association, trust, joint
venture, corporation, group, subgroup, or other organization; and

Sec. 4. I hereby determine that the making of donations of the type specified
in section 203(b)(2) of IEEPA (50 U.S.C. 1702(b)(2)) by, to, or for the benefit
of, any person whose property and interests in property are blocked pursuant
to this order would seriously impair my ability to deal with the national emergency
declared in Executive Order 13303 and expanded in Executive Order 13315, and
I hereby prohibit such donations as provided by section 1 of this order.

Sec. 5. For those persons whose property and interests in property are blocked
pursuant to this order who might have a constitutional presence in the United
States, I find that, because of the ability to transfer funds or other assets
instantaneously, prior notice to such persons of measures to be taken pursuant
to this order would render these measures ineffectual. I therefore determine
that for these measures to be effective in addressing the national emergency
declared in Executive Order 13303 and expanded in Executive Order 13315, there
need be no prior notice of a listing or determination made pursuant to section
1(a) of this order.

Sec. 7. Nothing in this order is intended to affect the continued effectiveness
of any rules, regulations, orders, licenses, or other forms of administrative
action issued, taken, or continued in effect heretofore or hereafter under 31
C.F.R. chapter V, except as expressly terminated, modified, or suspended by
or pursuant to this order.

Sec. 8. This order is not intended to, and does not, create any right, benefit,
or privilege, substantive or procedural, enforceable at law or in equity by
any party against the United States, its departments, agencies, instrumentalities,
or entities, its officers or employees, or any other person.