New York City officials have agreed to pay up to 657.5m US dollars
(437m sterling) to thousands of rescue and clean-up workers after 9/11.

The settlement would compensate more than 10,000 plaintiffs who say they were
made sick by dust at the Ground Zero site of the attacks.

At least 95% of the plaintiffs must approve the deal for it to take effect.

The money would come from a federally financed insurance fund of almost $1bn
that the city controls.

A claims adjudicator, chosen by the lawyers involved in the case, would decide
on the validity of each plaintiff’s claim and how much compensation they were
entitled to.

The agreement follows a long battle in the courts, but must still be approved
by a judge and agreed to by the claimants.

The announcement was made on Thursday evening by the World Trade Center Captive
Insurance Company, which was set up to handle the claims of those injured in
the rescue effort.

In a statement, New York Mayor Michael Bloomberg called the settlement “a
fair and reasonable resolution to a complex set of circumstances”.

Some workers are expected to receive payments of only a few thousand dollars,
while others could be in line to get more than $1m, depending on their injuries.

The BBC’s Adam Brookes, in Washington, says the agreement means that the long-running
legal battle spawned by the 9/11 attacks may now be drawing to a close. 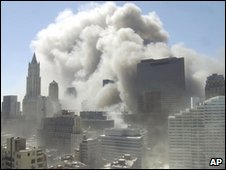 After the twin towers fell on 11 September 2001, rescuers spent weeks amid
the smouldering wreckage and choking dust in Lower Manhattan, but few were adequately
insured for such work.

The government set up a special insurance company to handle claims if any of
them ended up injured or sick.

The claims came flooding in, many for cancer and respiratory illness caused
by dust.

By early 2008, according to government documents, nearly 10,000 law suits had
been filed against the insurance company.

But only six claims were paid out.

Lawyers for the city had claimed it did its best to provide respiratory equipment
for workers, and challenged some claims as being based on flimsy medical evidence.

Marc Bern, a senior partner with the law firm which negotiated the deal, said:
“We are gratified that these heroic men and women who performed their duties
without consideration of the health implications will finally receive just compensation
for their pain and suffering.”

It is thought that the long courts battle has depleted the $1bn fund created
by Congress to help insure the city, with the legal bill so far running to more
than $200m.

More than 10,000 rescue workers affected by dust after 9/11 are eligible for
compensation.

The settlement would give compensation to more than 10,000 plaintiffs, who
say that they became ill because of dust from the destroyed World Trade Centre
towers.

Before it can take effect, at least 95 per cent of these plaintiffs must approve
the deal. It must also be approved by a judge.

It was announced yesterday evening by the World Trade Centre Captive Insurance
Company, a special body established to handle the legal claims of those injured
in the clear-up operation.

Most of the money would come from a $1bn (£664m) grant from the federal
emergency management agency.

New York mayor, Michael Bloomberg, said that it was "a fair and reasonable
resolution to a complex set of circumstances".