“All the News That Didn’t Fit”

The following was published in the September 2005 print edition, page one:

Three Sonoma County activists joined hundreds of others in Washington
DC for the July 22-24 9/11 Emergency
Truth Convergence (see website). Bonnie Faulkner producer
of Guns and Butter on KPFA, Robin Lathan- Ponneck, member of 9/11 Truth and
board member of Sonoma County Peace and Justice Center, joined Peter Phillips
with Project Censored for the three-day event that included congressional
hearings, a press conference at the National Press Club, a rally in Lafayette
Park, workshops at American University and a Strategy Summit. The Convergence
was held on the anniversaries of two current icons of offi cial deceit: the fi
rst anniversary of the Kean/Zelikow 9/11 Commission Report and the third
anniversary of the Downing Street Memo. Speakers from a wide variety of
organizations and political perspectives gathered to address the offi cial lies
by the US Government and the complicity of the corporate media.

Member
of Congress Cynthia McKinney (D-GA) hosted hearings in the Cannon Office
Building across the street for the Capital. The hearings held on July 22, 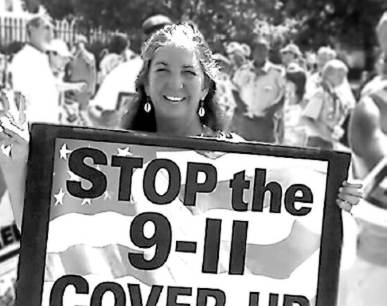 were
entitled, “The 9/11 Commission Report One Year Later: A Citizen’s
Response – Did the Commission get it right?” Over 25 cameras including
C-span fi lmed the speakers. Moderator for the day was Verna Avery Brown, with
Pacifica Radio. Lead-off testimony came from families of 9/11 victims. Lorie
Van Auken and Mindy Kleinberg maintain that major questions remain unanswered
regarding the events of 9/11. Van Auken stated that the Bush administration
delayed an investigation for over a year until family members had put extreme
pressure on Congress for the 9/11 Commission to be formed. Yet over 70% of their
questions were never addressed by the Commission. A parade of scholars, former
CIA officials, 9/11 authors and researchers testifi ed to the theme of the day
that the 9/11 Commission Report is incomplete and further research is needed.

Middle Eastern Scholar Nafeez Ahmed from London testified that the 9/11
hijackers were not Islamic extremists and they had repeatedly entered and
reentered the US with blatantly fraudulent visas. Many of the hijackers had
managed to receive high-level security clearances to train at US military
installations. During the afternoon of July 22, a Press Conference was held at
the National Press Club. David Ray Griffin author of The 9/11 Commission
Report: Omissions and Distortions, Peter Phillips, Project Censored, Danny
Schechter from Media Channel and Sunny Miller, Executive Director of Traprock
Peace Center spoke to over 50 independent news reporters. Mainstream corporate
media did not bother to attend.

Peter Phillips addressed the issue of the widespread psychological desire for
the 9/11 tragedy to be over. He referenced the dark closets in our
socio-cultural consciousness that make it so diffi cult to face the possibility
that internal forces may have aided the 9/11 hijackers. Danny Schechter stated
that, “the 9/11 Truth Movement has to do better to get its issues before
the American people, a public that might agree with them if they were better
able to articulate their concerns and the media was more willing to hear and
present them.” The DC Truth Convergence rally the next day – tagged the
“Defeat Lethal Deceit Rally” – was staged in Lafayette Park across the
street from the White House. The rally brought together activists, authors,
researchers, whistleblowers, and alternative media to expose and counter the
government’s lies and mainstream media complicity.

The rally began with David Ray Griffin, author of The New Pearl Harbor,
who spoke about war, media corruption and 9/11 as a pretext for American global
dominance. Griffin was followed by author Peter Dale Scott. Scott spoke to the
need for a broad-based movement to counter US imperialism, its wars of
aggression and the need for justice. Following was Sunny Miller of the Traprock
Peace Center on the effects of military’s use of depleted uranium, and Jenna
Orkin on the environmental disaster in lower Manhattan following the events of
September 11. Ex-CIA analyst Ray McGovern addressed the Downing Street Memo and
offi cial lies used as a pretext for war. Morgan Reynolds, former Chief
Economist, Department of Labor, in George W. Bush’s first term, gave a
passionate condemnation of the administration as having orchestrated the 9/11
attacks.

The second half of the rally included Oklahoma State Representative Charles
Key on the connections between the Oklahoma City bombing and 9/11; Paul Robin
Latham-Ponneck, Sonoma County Peace and Justice Center board member at DC rally.
Thompson, author of The 9/11 Terror Timeline; Nafeez Ahmed, author of The War on
Truth, on offi cial penetration and manipulation of groups accused of terrorism
globally; author Jim Marrs on official cover-ups of assassinations and 9/11;
Webster Tarpley, author of 9/11 and Synthetic Terror, on official
complicity in 9/11.

An impassioned speech by career US Air Force Officer and former Director of
the Star Wars programs under Presidents Ford and Carter, Robert Bowman,
concluded the rally. Bowman accused the Bush Administration of treason for its
complicity in the attacks of 9/11 and the invasions of Afghanistan and Iraq.
(Edited audio of the rally is streamed at www.gunsandbutter.net.)

Robin Lathan-Ponneck described her motivation for attending the convergence.
“I started helping out on the event several weeks before it happened and in
the course of that learned the names and particulars of many of today’s 9/11
whistleblowers, activist, experts and authors. This cause is about finding out
the truth, exposing the lies and cover-ups, and hopefully bringing out the full
story so Americans – millions versus thousands – can know what really happened on
September 11. As a seasoned peace activist I am not surprised to find that my
government has lied to me. I can entertain the idea that perhaps the Bush
administration used this tragedy to forward its own agenda. But it’s worse
than I ever imagined. 9/11 Truth is not a group of x-file-like freaks who have
dreamed up some paranoid conspiracy. These are educated, curious, truth and
justice seekers, and they are trying to get the facts that are known out
there.” The Convergence ended on Sunday with workshops, planning, and
strategy sessions at American University. Media activists from all over America
met to share strategies on how to get the truth out. It became clear that
various competing theories of how 9/11 occurred remain with two major camps – the
government let it happen and the government made it happen.

There was significant agreement that key questions about 9/11 remain
including: why extensive pre-warnings were ignored; why the US Airforce failed
to respond; how Atta was funded by $100,000 by Pakistan’s intelligence
service; how stock options were preordered before the attack; why Building 7
fell; why Bush delayed in Florida; and why Israeli agents were living next to
Atta in Florida. (Details on these questions are available at www.projectcensored.org/newsflash/unanswered_questions_911.html.)

Overall the convergence allowed an extremely diverse group of people with
numerous political orientations to form alliances with each other. People
networked, received affirmation, and heard speakers and workshop presenters.
Many came home with new information, books and literature. The conversations
over meals and after hours in the dorms were eye opening in a sad and heavy way.
Robin Lathen-Ponneck stated, “The bad news is: it looks like an inside job.
The good news is we can still go to our Capital and question our
government.”