CIA A Review of The Phoenix Program

Originally published at WashingtonsBlog by Kevin Ryan on 6/26/14

Douglas Valentine’s The Phoenix Program is vital for understanding the history of terrorism and its role in political warfare. Few other historical accounts provide as much detail on how the U.S. government and the CIA began to use programs for counterterrorism to implement political policy through secretive, coldblooded actions. Understanding such history is critical to making sense of what is happening in our world today.

Although implemented as a means of countering terrorism, Valentine shows how the Phoenix Program was in practice a CIA-controlled campaign of terror in Vietnam. Hidden behind terms like pacification and neutralization, Phoenix implemented a program of terror and psychological warfare against the civilian population. Under the guise of counterterrorism, tens of thousands of civilians were kidnapped, tortured, and murdered. 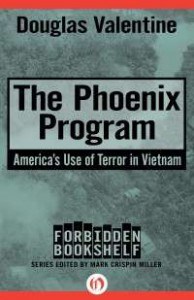 Valentine explains how the purpose of Phoenix was to terrorize the people into submission, not only causing them to fear any possible association with the enemy but also as a means to crush dissent. Unfortunately for many Vietnamese peasants, they were caught in a world in which they were terrorized by both sides in the long-lasting conflict. Using psychological warfare techniques, Phoenix promised to protect the people from terrorism while simultaneously terrorizing them.

The book describes the history of the program well. Phoenix and its precursor ICEX aligned the CIA-supported Provincial Reconnaissance Units (PRUs) with police and paramilitary programs to create a system for capturing or killing suspects in targeted ways. Once captured and brought in for interrogation, the suspect was as good as dead. The growing fear of this program led to further abuses including false accusations and payoffs. The contractor Pacific Architects and Engineers built interrogation centers in every province and doubled as an employment front for other CIA operatives.

The U.S. Army’s participation in Phoenix led to the military purposefully targeting civilians. In 1968, Defense Secretary Clark Clifford called for Phoenix to be “pursued more vigorously.” In March of that year 504 men, women and children were killed in My Lai. Although it was covered up, Valentine argues that My Lai was a product of Phoenix, under CIA control.

Many of the characters in Valentine’s book went on to play infamous roles in other scandals. Clark Clifford, for example, went on to lead the notorious Bank of Credit and Commerce International (BCCI), discovered to be a CIA-controlled terrorist network. Clayton McManaway, hired by William Colby as a Phoenix program manager, later became a principal advisor in the ransacking of Iraq under L. Paul Bremer in 2003. Most remarkably, control of Phoenix was transferred to Ted Shackley in 1969. Shackley would become the leader of the “CIA within the CIA,” and was implicated in events like the Iran-Contra crimes. These facts demonstrate that once something like Phoenix is created and allowed to flourish, the philosophy and machinery behind it does not go away.

This book is well written and every page holds the reader’s attention. More importantly, it provides great historical background and analysis that is crucial to understanding terrorism and how it drives government policy today.

The Phoenix Program is now part of a new series edited by Mark Crispin Miller called the Forbidden Bookshelf.

Launching the US Terror War: the CIA, 9/11, Afghanistan, and Central...

ABLE DANGER and the 9/11 Whitewash

“A Total Rollback Of Everything This Country Has Stood For”