Originally published at CSMonitor by Warren Richey on 6/30/14

Lawyers for 9/11 victims sought to pursue what they said were the ‘principal financial and operational supporters of al Qaeda.’ But lower courts dismissed much of their lawsuit, and the US Supreme Court declined to get involved.

Thousands of victims of the 9/11 terror attacks have lost their bid to revive a class-action lawsuit against various banks, financial officials, and members of Osama bin Laden’s family for allegedly providing material support to Al Qaeda. 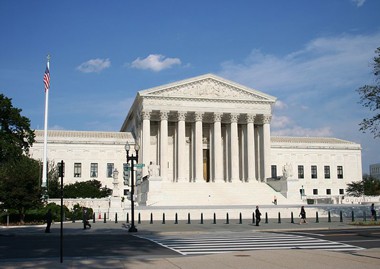 The US Supreme Court on Monday declined to take up a case examining whether lower courts properly dismissed a significant portion of their lawsuit.

The justices had asked the Obama administration for its views on the case. US Solicitor General Donald Verrilli said in a filing last month that the court should reject the case.

Lawyers for those killed or injured or who suffered property damage in the hijack-terror operation sought to pursue what they said were the “principal financial and operational supporters of al Qaeda” during the period leading up to the Sept. 11, 2001, attacks.

A federal judge and a federal appeals court dismissed much of the case, ruling that the plaintiffs’ lawyers had failed to show evidence that actions taken by the alleged Al Qaeda supporters had proximately caused the injuries suffered by the victims on 9/11.

In addition, the appeals court ruled that the victims’ lawyers had failed to demonstrate that the defendants intended that their actions would harm the United States.

In April 2013, the Second Circuit Court of Appeals dismissed the case against 25 of 37 alleged Al Qaeda supporters.

Lawyers for the accused officials and companies had argued that the victim-plaintiffs offered insufficient proof that their clients were involved in the 9/11 attacks.

“Throughout more than ten years of litigation, [they] have been unable, in the view of multiple federal judges, to identify any specific allegations to support their claims against the vast majority of defendants,” he said in his brief to the court.

Lawyers for the 9/11 victims argued in their briefs that the lower courts had wrongly dismissed portions of the lawsuit. The Second Circuit decision significantly undercuts the ability of US victims of terrorism to hold alleged behind-the-scenes supporters of Al Qaeda responsible for their actions, they said, and it undermines US counterterrorism policies.

“The suit targets those who use and operate the web of financial and operational networks that leading anti-US terrorist groups depend upon to develop their global strike capabilities, move money and personnel internationally, and shield their activities from counter-terrorism efforts,” wrote Washington lawyer Carter Phillips in his petition to the court.

In the current case, the appeals court is allowing the lawsuit to move forward to permit plaintiffs’ lawyers to further investigate 12 individuals named in the suit.

Those defendants include a Saudi banker who traveled to the US in early September 2001 and reportedly changed his hotel to the same one used by at least three of the Saudi hijackers.

The theory behind the civil litigation against alleged Al Qaeda supporters is that anyone who assisted bin Laden and his group had to know that Al Qaeda was planning acts of international terrorism and that their actions would support indiscriminate terror attacks.

But the appeals court said that wasn’t enough. There had to be more proof of involvement in terrorism and evidence of an intention to harm Americans.

“Providing indirect funding to an organization that was openly hostile to the United States does not constitute this type of intentional conduct,” the appeals court ruled.

In dismissing the claim against bin Laden’s four half brothers and the Saudi Binladin Group, the court noted that Osama bin Laden had been removed as a shareholder of the family construction business in 1993 – prior to his declarations of war against the US and Al Qaeda attacks in East Africa and Yemen and on 9/11.

Mr. Phillips said in his brief that the Second Circuit decision was causing serious harm to US counterterrorism policies. He said federal law “seeks to deter support for terrorism and is meant to reach beyond those who themselves commit the violent act that directly causes the injury.”

“A contrary interpretation would mean that Congress created a largely hollow remedy if it merely allows suits against terrorists who pull the trigger or plant the bomb,” Phillips wrote.

He said the US Anti-Terrorism Act was written to reach actions that aid and abet terrorism. “The ATA’s broad language includes no limitation on which defendants are subject to claims and instead extends liability to those who provide material support to terrorism, including the financing and provision of financial services in support of terrorism,” he said.

Lawyers for the alleged aiders and abettors disagree. They say US law draws important distinctions about who can – and cannot – be sued.

“Petitioners do not claim that the Respondents participated in any way in the September 11 attacks or provided contemporaneous support to Osama Bin Laden or Al-Qaeda,” Mr. Gauch said.

“Instead, they argue that conduct outside the United States that directly or indirectly benefited Al-Qaeda several years before the attacks … is enough to [authorize a lawsuit],” he said.

“Without alleged facts that Respondents themselves expressly aimed their conduct at the United States, personal jurisdiction does not lie over foreign defendants simply because they are alleged to have supported groups hostile to the United States,” he wrote.

Justice Elena Kagan recused herself from the case.