Home Activism Accountability Shocking and Awe-ful–Government Secrecy (or, How can this guy still be in... 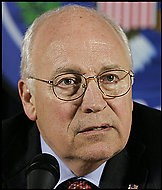 Vice President Cheney’s office has refused to comply with an executive order governing the handling of classified information for the past four years and recently tried to abolish the office that sought to enforce those rules, according to documents released by a congressional committee yesterday.

Since 2003, the vice president’s staff has not cooperated with an office at the National Archives and Records Administration charged with making sure the executive branch protects classified information. Cheney aides have not filed reports on their possession of classified data and at one point blocked an inspection of their office. After the Archives office pressed the matter, the documents say, Cheney’s staff this year proposed eliminating it.

The dispute centers on a relatively obscure process but underscores a wider struggle waged in the past 6 1/2 years over Cheney’s penchant for secrecy. Since becoming vice president, he has fought attempts to peer into the inner workings of his office, shielding an array of information such as the industry executives who advised his energy task force, details about his privately funded travel and Secret Service logs showing who visits his official residence.

The aggressive efforts to protect the operations of his staff have usually pitted Cheney against lawmakers, interest groups or media organizations, sometimes going all the way to the Supreme Court. But the fight about classified information regulation indicates that the vice president has resisted oversight even by other parts of the Bush administration. Cheney’s office argued that it is exempt from the rules in this case because it is not strictly an executive agency.

“He’s saying he’s above the law,” said Rep. Henry A. Waxman (D-Calif.), chairman of the House Oversight and Government Reform Committee, which released a series of correspondence yesterday outlining the situation. “It just seems to me this is arrogant and shows bad judgment.”

Cheney’s office declined to discuss what it called internal matters. “We are confident that we are conducting the office properly under the law,” said spokeswoman Megan McGinn.

The Justice Department confirmed yesterday that it is looking into the issue. “This matter is currently under review in the department,” said spokesman Erik Ablin, who declined to elaborate.

The standoff stems from an executive order establishing a uniform, government-wide system for safeguarding classified information. The order was first signed by President Bill Clinton in 1995 and was updated and reissued by President Bush in 2003. Under the order, an “entity within the executive branch that comes into the possession of classified information” must report annually how much it is keeping secret.

Cheney’s office filed annual reports in 2001 and 2002 describing its classification activities but stopped filing in 2003, according to internal administration letters released yesterday. Cheney’s office made the case that it is not covered because the vice president under the Constitution also serves as president of the Senate and therefore has both legislative and executive duties.

In 2004, the Archives’ Information Security Oversight Office, a 25-member agency responsible for securing classified information, decided to conduct an on-site inspection of Cheney’s office to see how sensitive material was handled. The vice president’s staff, according to a letter Waxman sent Cheney, blocked the inspection.

After the Chicago Tribune reported last year that Cheney failed to report classification data, the Federation of American Scientists filed a complaint. J. William Leonard, director of the Archives’ oversight office, sent two letters to Cheney’s chief of staff, David S. Addington, requesting compliance with the executive order but received no replies. Leonard then wrote Attorney General Alberto R. Gonzales in January asking him to render a legal ruling on whether the vice president is violating the order. Gonzales has not replied.

In an interview yesterday, Steven Aftergood, who directs the federation’s Project on Governmental Secrecy, said the dispute concerns “a very narrow bit of information” but indicated a broader disregard for following the same rules as the rest of the executive branch. “By refusing to comply with these trivial instructions, the vice president undermines the integrity of the executive order,” he said. “If it can be violated with impunity on a trivial point, then it can also be violated on more important matters.”

Leonard, in his letters to Addington and Gonzales, argued that the interpretation that the Office of the Vice President is not an executive entity “could impede access to classified information by OVP staff, in that such access would be considered a disclosure outside the executive branch.”

But Leonard may have angered Cheney’s office with his persistence. The administration is conducting a review of the executive order, and Leonard told Waxman’s staff that Cheney aides proposed amending the order to abolish the Archives oversight office and explicitly exempt the vice president from its requirements. The elimination of the office has been rejected, Waxman said.

Leonard did not return phone messages yesterday. Susan Cooper, a spokeswoman for the National Archives, said: “In carrying out the responsibilities of the National Archives Information Security Oversight Office, we will continue to be responsive to the concerns of all governmental parties.” Cheney’s press office refused to comment on the changes proposed to the executive order.

More from the same White House that threatened to veto the Whistleblower Protection Enhancement Act of 2007, refused to testify under oath to the 9/11 Commission and every other committee that’s tried to investigate anything, and was the subject of a Congressional Research Service Report, “a searchable collection of 237 specific misleading statements made by Bush Administration officials about the threat posed by Iraq” preceeding the opening days of shock and awe in Iraq. Indeed, shocking and awesome take on new meaning daily!

See also Henry Waxman’s fact sheet entitled, “The Vice President’s Efforts to Avoid Oversight and Accountability” and these related articles, “Waxman Decries Cheney Security Exemption“, and “Gov.
Asks Judge to Toss Spying Lawsuits“–“They’ve come to federal court to stop state officials from even beginning their investigations,” DeAlmeida said. “They are insulating the federal government from any investigation from state officials by insulating themselves in state secrets arguments.”

So is he impeached YET? Call your Representative right now with this information, insist s/he support Kucinich’s Cheney Impeachment resolution (H.Res. 333), and call again every single day until you see her/his name listed as a cosponsor. Really, there just simply is no longer ANY excuse not to demand immediate impeachment.