The Eighth Annual 9/11 Truth Film Festival will explore what featured speaker, professor, author, former diplomat, Peter Dale Scott has termed “deep events.” Scott defines “deep events” as those that are systematically ignored or falsified in the mainstream media and public consciousness. The Film Festival, will be held again at the historic Grand Lake Theater, 3200 Grand Ave, Oakland, on Tuesday, September 11, 2012 from 2 pm to 11 pm, and is a benefit for the Northern California 9/11 Truth Alliance.

9/11 bears the fingerprints of an audacious false flag operation, but it also fits into a long historical pattern of events designed to provoke and alter public sentiment and behavior. A range of films and film excerpts, along with speakers, will analyze multiple events, including the Oakland bombing of activist Judi Bari, the Oklahoma City bombing, and the London bombings. Speakers will include Chris Emery film producer of A Noble Lie — Oklahoma City 1995; Professors Peter Phillips and Mickey Huff of Project Censored; Mark Gaffney, author of Black 9/11 Money, Motive, and Technology and The 9/11 Mystery Plane And the Vanishing of America. In addition to the films specifically about 9/11, including The Toronto Hearings on 9/11 – Uncovering Ten Years of Deception, the new one hour television version of 9/11: Explosive Evidence — Experts Speak Out, the documentary I am Fishead will premiere and cast some light on psychopaths, empathy, authority and the power of moral courage.

Bonnie Faulkner, producer of the popular KPFA radio program Guns and Butter will serve as mistress of ceremonies. Tickets are $10- $7 at the door. 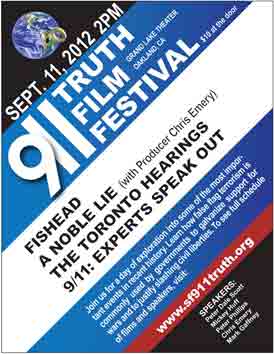 The generous owner of the Grand Lake Theater, Allen Michaan has graciously donated the theater every years since 2005 to the Northern California 9/11 Truth Alliance, pioneers of the 9/11 Truth Movement. In 2005, and in the wake of Hurricane Katrina, film festivals were held at the Herbst Theater in San Francisco and the Grand Lake Theater in Oakland. Over the years the Bay Area has hosted numerous 9/11 Truth rallies, events, speakers and produced many significant documentaries, books, outreach materials, music, and radio shows. The film festival generally draws hundreds of activists, supporters, as well as the general public to an all day event which provides, in addition to films and speakers, an opportunity for dialogue, socializing, and organizing in the spacious lobbies of the theaters and nearby restaurants. Volunteers also promote the events through street actions, freeway blogging, and whatever means they can to break censored ideas and information to fuel the growing movement for peace, justice, truth, accountability, genuine democracy.
Editor’s Note:
Just announced . . . Worldwide Livestream Accessibility to Film Festival!No Lies Radio will live video stream this film festival nearly in its entirety, including all of the speakers most of the films. This remarkable event will now be accessible worldwide! Please follow this link to learn more about how to tune in on September 11th from 2pm to 11pm Pacific Daylight Time: http://noliesradio.org/archives/51033.

Peter Dale Scott has spoken before at numerous events, his work was showcased in one of the first documentaries Aftermath – Unanswered Questions from 9/11; he describes “deep politics” in a recent interview posted at Deep Politics Intro. A former diplomat, Canadian by birth, a poet, a courageous speaker, organizer, writer, a professor emeritus from UC Berkeley, researcher who continues to speak out; he is greatly esteemed by activists. He uncovers the relationships between the relationships between the mafia, the intelligence agencies, drug trafficking and other powerful entities in his books – The Road to 9/11 – Wealth, Empire, and the Future of America, The War Conspiracy: JFK, 9/11, and the Deep Politics of War, American War Machine: Deep Politics, the CIA Global Drug Connection, and the Road to Afghanistan.

Professor Peter Phillips, President of Media Freedom International, past director of Project Censored, host of KPFA’s Friday Morning Mix Project Censored show. Peter Phillips has published 13 editions of Censored: Media Democracy in Action, the annual Project Censored book. He also authored Impeach the President: The Case Against Bush and Cheney (2006) and the Project Censored Guide to Independent Media and Activism (2003). In 2009, he received the esteemed Dallas Smythe Award from the Union for Democratic Communications. Amongst his many articles and reports is his latest “The Global 1%: Exposing the Transnational Ruling Class.”

Chris Emery is a film maker and researcher. He discovered a consistent pattern of lies and deception contained in the U.S. Governments ‘official accounts’ of the shootout at Ruby Ridge, WTC – ’93, the WACO massacre, the OKC bombing, the downing of TWA Flight 800 and 9/11. He is featured in the new documentary A Noble Lie — Oklahoma City 1995
which he helped produce.

Mark Gaffney is an environmentalist, peace activist, researcher, and the author of many books including- the novel The First Tree of the Day, and Gnostic Secrets of the Naassenes and Dimona, the Third Temple? The Story Behind the Vanunu Revelation, as well as two excellent books focusing on neglected aspects of 9/11, the technologies that were used and the presence of the most sophisticated US communications planes “The Doomsday planes” that were seen above DC on 9/11 in his latest books- Black 9/11 Money, Motive, and Technology and The 9/11 Mystery Plane And the Vanishing of America.

I am Fishead (80 minutes) is a documentary produced by Misha Votruba, a former psychiatrist with extensive creative experience in feature film, documentaries and experimental theater and Vaclav Dejcmar, an economist and one of the major shareholders in the brokerage firm RSJ, which ranks among the largest players on world financial markets. The film explores “how psychopaths and antidepressants influence our society.” Narrated by Peter Coyote, psychiatrists, authors, poets, as well as Vaclav Havel, provide a provocative snapshot of psychopaths, their impact on others and society, the human response to powerful examples, and the mechanisms of social change. (See the trailer posted at the website fisheadmovie.com.)

A Noble Lie – Oklahoma City 1995 (2 hours) is a documentary directed by James Lane produced in Oklahoma City. The film is the culmination of years of research and documentation conducted by independent journalists, scholars, and ordinary citizens. Often risking their personal safety and sanity, they have gathered evidence which threatens to expose the startling reality of what exactly occurred at 9:02 am on April 19, 1995 in Oklahoma City. Their mission is “to alter the information paradigm with hard-hitting exposes of State crimes and cover-ups.” (See the trailer posted at the website freemindfilms.com.)

The Toronto Hearings – Uncovering Ten Years of Deception (5 hours – only excerpts will be shown at the film festival due to its length) is a documentary produced by Press For Truth and The International Center for 9/11 Studies of the hearings held last year in Toronto on the tenth anniversary featuring distinguished researchers and authors addressing key evidence challenging the official narrative of 9/11. (See the trailer at the Toronto Hearings website torontohearings.org. We tried unsuccessfully to show part of the hearings live last year, but couldn’t overcome technical challenges.

9/11: Experts Speak Out (One Hour) produced by Architects and Engineers for 9/11 Truth. This film has been in process for two years and a lengthier version was shown last year, as well as a 90 minute version on a more recent 30 city world tour, but it has been edited down to one hour to air on television to highlight the best insights and information offered by scientists, architects, engineers presenting evidence focusing on the impossible narrative about the destruction of the World Trade Center buildings on September 11th. (See the trailer at 911expertsspeakout.org). AE911Truth.org was founded by local architect Richard Gage, AIA, a member of the Northern California 9/11 Truth Alliance who will be attending events this year in NYC.

More details including the program schedule will be posted at SF911Truth.org.