Drawing on empirical evidence, Dr. Griffin points to many alleged flaws and
contradictions in the official 9/11 report. As a result, he has been called
a leading exponent of alternative theories questioning the official account
of the September 11, 2001 attacks.

His many books on the subject include: The New Pearl Harbor: Disturbing
Questions About the Bush Administration and 9/11 (2004), The 9/11 Commission
Report: Omissions And Distortions (2005), Christian Faith and the Truth
Behind 9/11: A Call to Reflection and Action (2006), 9/11 and the American
Empire: Intellectuals Speak Out (2006), Debunking 9/11 Debunking
(2007), and 9/11 Contradictions: An Open Letter to Congress and the Press
(2008).
Deadline for emailed questions is 9pm Pacific Time, Monday, Feb. 16th. Not all
emailed questions will be answered on the air.

Note from NoLiesRadio: Fair & Balanced with Kevin Barrett is independently
produced and hosted by Kevin Barrett and these shows are externally produced
content. All externally produced content broadcast on No Lies Radio is the sole
responsibility of the program-content producer and is not the responsibility
of NoLiesRadio.org. Any questions or concerns should be directed to the content
producer. 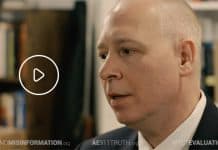