The New Landmark Documentary by AE911Truth

AE911Truth is proud to announce the completion of the Final Edition of our milestone documentary, 9/11: Explosive Evidence — Experts Speak Out, and

we are taking the film on the road with a whirlwind World Premiere Tour across the U.S., starting on May 21. The director of Experts Speak Out, AE911Truth founder Richard Gage, AIA, will personally introduce this groundbreaking film at top venues in 30 cities nationwide and take questions from the audience after each screening. Tickets are on sale now, so make sure to buy yours before the events sell out.

Join us in one of 30 cities near you on this tour, which begins in San Diego, CA, and covers 24 states from coast to coast.

The official “Opening Night” of the tour will be in Los Angeles at the Beverly Hills Music Hall Theater on May 22. Famed actor Ed Asner, the star of our previous short-film hit, Architects & Engineers — Solving the Mystery of WTC 7, will join Gage at the kickoff Press Conference at 7pm, and will introduce the movie, which starts shortly thereafter.

We will also be joined at the “Opening Night” premiere by veteran Hollywood actors John Heard and Judd Nelson. In addition, high-rise architect Robert McCoy, one of the respected building professionals featured in Experts Speak Out, will be in attendance.

A variety of special guests will appear with Gage at other premiere locations across the country, including experts featured in the film, family members of 9/11 victims and prominent public figures who support 9/11 Truth. For example, mechanical engineer Tony Szamboti and 9/11 family member Bob McIlvaine, who made headlines with their explosive 9/11 interview on Fox News in 2010, will be attending the premiere screening in Philadelphia.

More special guests will be announced in the coming days as the remaining tour dates and locations are finalized, so stay tuned to the Upcoming Events page for the most up-to-date details.

The 95-minute Final Edition of Experts Speak Out is the result of over six months and hundreds of hours of editing and updating the pre-release version. The numerous improvements include: 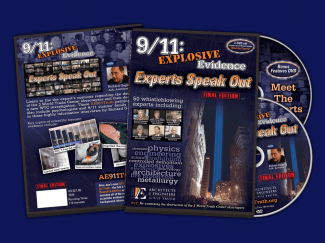 The seeming implausibility of the implications of the three World Trade Center skyscrapers being demolished with explosives is also handled quite skillfully in the film, as eight experts in psychology discuss the difficulties many people have in confronting the myth-shattering reality.

The Final Edition cased set also includes a bonus DVD, titled “Meet the Experts”, which provides expanded interviews and backgrounds on each of the experts featured in the documentary.

How You Can Help

You can provide much-needed support by showing up early to the events and helping with set-up.

Prior to the events, you can also assist with publicity. We need several people in each city to telephone each of the radio, newspaper, and TV stations that reach the community. Invite media representatives in your area to interview Gage prior to or after the events, and encourage them to come and cover the events as well.

In addition, you can download the Press Advisory and Press Release for these AE911Truth-sponsored World Premieres. Feel free to customize them for your particular city, venue, and press, and distribute them to local media outlets. You can also download the posters, flyers, and cards, print them and distribute them in your city. Whether you post them on bulletin boards, place them on cars in parking lots, or hand them to passersby on busy street corners, your participation will help draw even more attention to this critically important and unprecedented tour.

If you can’t help with publicity or other volunteer opportunities to make the tour a success, then we encourage you to support our Tour with your generous donation today. AE911Truth has taken on a huge risk to produce this tour, which is not locally sponsored like most of our previous speaking engagements. Help us fund the flights and venue bookings and ads needed in each of the 30 cities. The costs are enormous, and the presales from online ticket purchases are not expected to cover all of them.

If you haven’t yet joined the family of sustaining supporters, we invite you make your monthly pledge today and let us know that we can count on your continuous support so that we can plan for even more effective future projects — including the creation of special editions of Experts Speak Out.

On May 21, our Virtual Action Kit at 911ExpertsSpeakOut.org will be online and ready to support viewers of the documentary who want to take further action in their community. Mark your calendar and visit our kit after May 21.

You can also attend a locally-sponsored World Premiere screening of Experts Speak Out in your own community in June — in concert with the AE911Truth Tour!

In fact, we have created guidelines that show you how to host your own World Premiere screening of Experts Speak Out with a local AE911Truth representative. There’s no end to what you can do to make a difference!

Be sure to read the May Edition of the AE911Truth Blueprint Newsletter for more information about this historic tour. We look forward to seeing you on the road!