NEW YORK (Jan. 31) – Large steel columns from the fallen twin towers have been found beneath a service road being excavated at ground zero in the search for long-buried Sept. 11 remains, officials said Wednesday.

The surprising discovery of World Trade Center steel in the past week raises more questions about what was left at ground zero in the cleanup after the 2001 attacks and how the service road was created in the first place.

The steel, found during a dig for human remains that has yielded nearly 300 bones in the past three months, includes two heavy beams that were stacked horizontally in the landfill, as if moved and placed there, a person with direct knowledge of the discovery told The Associated Press. The person was not authorized to publicly discuss the findings and insisted on anonymity. 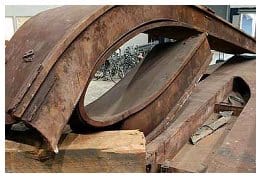 The discovery was confirmed by officials for the city and Port Authority of New York and New Jersey, which owned the trade center.

The columns were about 18 feet long and perhaps 60 tons each. Officials believe the steel columns, located a week ago just 2 to 3 feet below the surface of the road, were deliberately set there at some point during the cleanup, perhaps to stabilize heavy machinery in use at the time.

Deputy Mayor Ed Skyler, who is overseeing the search for remains, declined to speculate on how the steel might have ended up where it did.

Digging was halted in the immediate area surrounding the steel columns until the Port Authority removes the steel. The columns will be put into storage at a hangar at Kennedy International Airport, agency spokesman Steve Coleman said Wednesday. The hangar stores all sorts of artifacts from the trade center, including what was believed to be the last column removed from the site in May 2002.

The person with knowledge of the discovery told the AP that three connected steel columns that once formed the facade of the trade center were also found below the road. Another column was found on the other end of the trade center site, where the Port Authority is building a retaining wall for three planned office towers, the person said. Unlike the stacked columns, this steel appeared to be burned at one end.

Officials involved in the initial cleanup have said that some steel pierced the ground as it fell and later was cut off above street level to speed up parts of the cleanup.

Throughout the renewed search for remains, crews had been finding smaller bits of debris from the towers as they dug into the material under the service road.

In December, Skyler expanded the search in that area because of the discoveries of small scraps of steel, electrical wires, computer parts and office carpeting – but nothing that came close to the major pieces of trade center steel.

“We’ve been finding material from the buildings throughout the haul road, so in that context it’s not that surprising,” Skyler said. “What’s most important to us is locating remains that we can find and returning them to the families.”

The city agency in charge of the debris removal in 2002, which also oversaw construction of the road, could not say how the steel got there and why it was never removed. Matthew Monahan, spokesman for the Department of Design and Construction, declined to comment and referred calls to Skyler.

Diane Horning, who lost her son on Sept. 11 and is a leading critic of the city’s search for remains, said the steel discovery proves that the city ended cleanup too quickly and paved over the service road without searching it.

“They built it so that they could get their project done ahead over schedule and under budget, which was always their first priority,” Horning said. “It’s repulsive.”

Interesting find. More interesting is the fact that this author felt compelled to “explain” why the ends of the steel ‘appeared to be burned at one end.’ It will be extremely important to have this steel made immediately available for forensic testing–unfortunately, the article states these beams “will be put into storage at a hangar at Kennedy International Airport… The hangar stores all sorts of artifacts from the trade center, including what was believed to be the last column removed from the site in May 2002.” To date, we know of no testing by independent authorities of any of the artifacts stored in that hangar.

Furthermore, the fact that “nearly 300 bones have been yielded in the past three months” is simply appalling. For five long years the victims’ families groups, such as WTC Families for Proper Burial, have had to fight to have their family members’ remains searched for and removed from Fresh Kills landfill for proper burial, and now more are being found in the vicinity of the towers, as well. As Diane Horning, whose son Matthew, 24, died in the North Tower, where he worked for the insurance company Marsh and McLennan, said in 2004, “We were promised the remains – any and all remains of the victims – and now we discover that my lost son is to spend eternity in a rubbish dump. This is morally reprehensible and emotionally unacceptable, and we are going to fight it all the way.” (Telegraph.co.uk).
This is ridiculously unacceptable, especially from a government that reminds us of 9/11 every time it demands more money for war or attempts to justify its vast array of civil liberties infringements, torture, and other illegal activities.

It seems obvious to this writer that the interests of 9/11 victims’ family members is last in the list of priorities for this government and the press. We must continue to demand truth and accountability for the events of 9/11/01, so that these families, and the nation as a whole, can find closure for our losses and know that justice has finally been served.