It was historical and exciting to watch 911 truth being questioned at the Japanese Diet (Parliament) on Jan 10, 2008. For the first time in Japan serious questions were first asked as to the legitimacy of Japans support for the US ‘War On Terror’. The proceedings were aired live on NHK TV (Japan Broadcasting Corporation). See the full session below on YouTube, with English subtitles… A transcript can be read here.

Though the session was broadcast live on NHK TV, no newspaper or TV new program on that day or in the days following has mentioned it. Only people who happened to be watching TV at the time it was broadcast know of it, and that, of course, is not so many people.

It is quite obvious that the media here is Japan is controlled by powers that do not want this topic to be brought to the attention of the population in general. 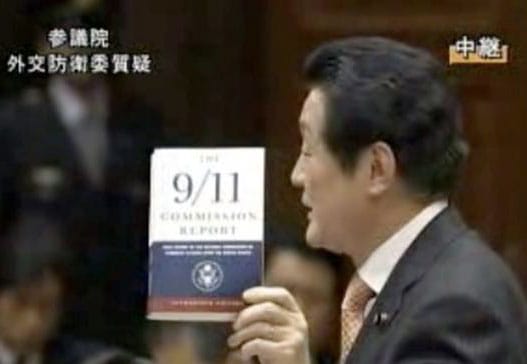 The person who made history is Mr. Yukihisa Fujita, a member of Democratic Party of Japan and of the House of Councillors. Before becoming a politician, Mr. Fujita spent more than 20 years working for International human rights NGO’s such as MIRA (IC) and Nanmin wo Tasukeru Kai (Association for Aid and Relief, Japan), helping young refugees of war.

I have known him for quite a while and we have a mutual trust and understanding. I was honored to be able to provide the information he used during the January 10th session of the Diet. Benjamin Fulford and Chihaya also supplied him with 911 related information. Mr. Fujita was warned not to speak too much about 911 as it is dangerous matter, but he was and is determined to continue seeking the truth regardless of such threats.

Working for refugees, especially children, for so many years made him realize that war is not the way to tackle terrorism. In this regard we have a common stance about how to go about international politics and the importance of using peaceful means to resolve disputes and conflicts. Thanks to the many wonderful activists, film makers and researchers around the world I am now convinced that 911 was not the terrorist attack planned by Osama bin Ladin and Al Quada that the US would like us all to believe. The people behind 911 wanted an excuse to have a ‘war’ so that they could get rich from the making weapons and the destruction of innocent lives. Their greed is not only for money however, it is for power too. It is becoming clear that they are now trying to control every aspect of our lives, from what we eat and drink, to where we go and can’t go, to where we live and can’t live, to even what we think!

The events of September 11th, 2001 could not have happened without the support of people high in power in the US government, including perhaps Vice President Dick Cheney. I doubt President Bush could have planned such sophisticated and complicated events but that does not mean he was not ‘in the know.’

What we can and need to do is to spread this news, the truth of what really happened on 911, as widely as possible! There are many good 911 videos you can watch online for free… If you are in Japan, we have some DVD’s available in both English and Japanese at our Global Peace Campaign Store.