The trial of Yemeni captive Salim Hamdan at the remote U.S. naval base at Guantánamo
Bay in Cuba was the first full test of the controversial tribunal authorized
by the Bush administration to try foreign captives on terrorism charges outside
the regular U.S. court system.

The White House welcomed the conviction while human rights and civil liberties
groups condemned it.

The judge scheduled a sentencing hearing for Wednesday afternoon for Hamdan,
who faces a maximum penalty of life in prison.

The jurors deliberated a little over eight hours before reaching their verdict.

Hamdan, wearing a white turban and long white robe topped with a tan blazer,
stood tensely in the courtroom beside his lawyers as the verdict was announced,
listening through headphones to the English-Arabic interpreter. He raised his
hands and wept into them as the guilty verdict was read.

In Washington, White House spokesman Tony Fratto said the administration was
pleased that Hamdan received a fair trial and looked forward to trying other
Guantánamo captives.

"The Military Commission system is a fair and appropriate legal process
for prosecuting detainees alleged to have committed crimes against the United
States or our interests. We look forward to other cases moving forward to trial,"
he said.

"Any verdict resulting from such a flawed system is a betrayal of American
values. The rules for the Guantánamo military commissions are so flawed that
justice could never be served. From start to finish, this has been a monumental
debacle of American justice," said ACLU Executive Director Anthony Romero
in a statement.

The jury of military officers heard two weeks of testimony, including that
of 10 federal agents who interrogated Hamdan without warning him that his confessions
would be used against him in a criminal trial.

It was the Bush administration’s third attempt to try Hamdan, who won a Supreme
Court victory that scrapped the first version of the Guantánamo court system
in 2006. The charges were twice dropped and refiled

.The charges he was cleared of on Wednesday — two counts of conspiring with
al Qaeda to attack civilians, destroy property, commit murder in violation of
the laws of war — were the only charges against him in the first prosecution
attempt.

"The travesty of this verdict now is that had the case gone to trial in
2004 he would have been acquitted of all the charges," said Deputy Chief
Defense Counsel Michael Berrigan.

Hamdan was convicted on Wednesday of five counts of providing material support
for terrorism, specifically that his personal services to al Qaeda included
driving and acting as a bodyguard for a man he knew to be the leader of an international
terrorist organization.

The 11-page verdict form was so complicated that the judge called for a yellow
highlighter pen and marked the portions the jury president was to read. Jurors
were allowed to strike some of the language in the charges, so some specifics
of the verdict were not immediately clear.

The rules allow four levels of appeal, first to the Pentagon appointee overseeing
the Guantánamo tribunals. She can overturn convictions and shorten the sentence
but cannot add convictions or lengthen the sentence.

After that, Hamdan could appeal to a special military appeals court, then to
the U.S. federal appeals court in Washington and finally to the U.S. Supreme
Court. 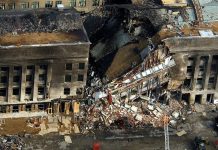 Evidence for Informed Trading on the Attacks of September 11

Analysing the CIA Response to Richard Clarke’s Allegations: Who Knew What...

9/11 Conspiracy Theories: Do Firefighters Believe Them?