“What are the defenders of free speech to do? The sad fact is that this fundamental freedom is on its heels across America. Politicians of both parties want to use the power of government to silence their foes. Some in the university community seek to drive it from their campuses.”

“What are the defenders of free speech to do? The sad fact is that this fundamental freedom is on its heels across America. Politicians of both parties want to use the power of government to silence their foes. Some in the university community seek to drive it from their campuses. And an entire generation of Americans is being taught that free speech should be curtailed as soon as it makes someone else feel uncomfortable. On the current trajectory, our nation’s dynamic marketplace of ideas will soon be replaced by either disengaged intellectual silos or even a stagnant ideological conformity. Few things would be so disastrous for our nation and the well-being of our citizenry.”—William Ruger, “Free Speech Is Central to Our Dignity as Humans”

My hometown of Charlottesville, Va., has become the latest poster child in a heated war of words—and actions—over racism, “sanitizing history,” extremism (both right and left), political correctness, hate speech, partisan politics, and a growing fear that violent words will end in violent actions.

In Charlottesville, as in so many parts of the country right now, the conflict is over how to reconcile the nation’s checkered past, particularly as it relates to slavery, with the present need to sanitize the environment of anything—words and images—that might cause offense, especially if it’s a Confederate flag or monument.

In Charlottesville, that fear of offense prompted the City Council to get rid of a statue of Confederate General Robert E. Lee that has graced one of its public parks for 82 years. In doing so, they have attracted the unwanted attention of the Ku Klux Klan.

Yale University actually went so far as to change the name of one of its residential colleges, which was named after John C. Calhoun, the nation’s seventh vice president, a secretary of state, secretary of war, senator and Yale alum who supported slavery.

New Orleans ran up a $2 million tab in its efforts to remove its four Confederate monuments, with the majority of the funds being used for security to police the ensuing protests and demonstrations.

With more than 1,000 Confederate monuments in 31 states (in public parks, courthouse squares and state capitols), not to mention Confederate battle flags on display in military cemeteries, and countless more buildings and parks named after historic figures who were slaveholders, this isn’t an issue that is going away anytime soon, no matter how much we ignore it, shout over it, criminalize it, legislate it, adjudicate or police it.

The temperature is rising all across the nation, and not just over this Confederate issue.

The “winter of our discontent” has given way to an overheated, sweltering summer in which shouting matches are skating dangerously close to becoming physical altercations.

As journalist Dahlia Lithwick writes for Slate, “These days, people who used to feel free to shout and threaten are emboldened to punch, body-slam, and stab. It is a short hop, we are learning, from ‘words can never hurt us’ to actual sticks and stones and the attendant breaking of bones. That is what has become of free speech in this country.”

Here’s the thing: if Americans don’t learn how to get along—at the very least, agreeing to disagree and respecting each other’s right to subscribe to beliefs and opinions that may be offensive, hateful, intolerant or merely different—then we’re going to soon find that we have no rights whatsoever (to speak, assemble, agree, disagree, protest, opt in, opt out, or forge our own paths as individuals).

The government will lock down the nation at the slightest provocation.

It is ready, willing and able to impose martial law within 24 hours.

Indeed, the government has been anticipating and preparing for civil unrest for years now, as evidenced by the build-up of guns and tanks and militarized police and military training drills and threat assessments and extremism reports and surveillance systems and private prisons.

When the police state cracks down, it will not discriminate.

We’ll all be muzzled together.

We’ll all be jailed together.

We’ll all be viewed as a collective enemy to be catalogued, conquered and caged.

The police state could not ask for a better citizenry than one that carries out its own censorship, spying and policing.

This is how you turn a nation of free people into extensions of the omniscient, omnipotent, omnipresent police state, and in the process turn a citizenry against each other. It’s a brilliant ploy, with the added bonus that while the citizenry remains focused on and distrustful of each other, they’re incapable of presenting a united front against the threats posed by the government and its cabal of Constitution-destroying agencies and corporate partners.

Unfortunately, we have already become a nation of snowflakes, snitches and book burners: a legalistic, intolerant, elitist, squealing bystander nation eager to report fellow citizens to the police for the slightest offense.

Mind you, once the police are called in, with their ramped-up protocols, battlefield mindset, militarized weapons, uniforms and equipment, and war zone tactics, it’s a process that is near impossible to turn back and one that too often ends in tragedy for all those involved.

So how do we stop this train from barreling down the tracks past the police state and straight into martial law?

Let’s start with a little more patience, a lot more tolerance and a civics lesson on the First Amendment.

As my good friend Nat Hentoff, that inveterate champion of the First Amendment, once observed, “The quintessential difference between a free nation, as we profess to be, and a totalitarian state, is that here everyone, including a foe of democracy, has the right to speak his mind.”

What this means is opening the door to more speech not less, even if that speech is offensive to some.

Understanding that freedom for those in the unpopular minority constitutes the ultimate tolerance in a free society, James Madison, the author of the Bill of Rights, fought for a First Amendment that protected the “minority” against the majority, ensuring that even in the face of overwhelming pressure, a minority of one—even one who espouses distasteful viewpoints—would still have the right to speak freely, pray freely, assemble freely, challenge the government freely, and broadcast his views in the press freely.

We haven’t done ourselves—or the nation—any favors by becoming so fearfully polite, careful to avoid offense, and largely unwilling to be labeled intolerant, hateful or closed-minded that we’ve eliminated words, phrases and symbols from public discourse.

The result is a nation where no one really says what they really think anymore, at least if it runs counter to the prevailing views. Intolerance is the new scarlet letter of our day, a badge to be worn in shame and humiliation, deserving of society’s fear, loathing and utter banishment from society.

For those who dare to voice an opinion that runs counter to the accepted norms, retribution is swift: they are shamed, shouted down, silenced, censored, fired, cast out and generally relegated to the dust heap of ignorant, mean-spirited bullies who are guilty of various “word crimes.”

We have entered a new age where, as commentator Mark Steyn notes, “we have to tiptoe around on ever thinner eggshells” and “the forces of ‘tolerance’ are intolerant of anything less than full-blown celebratory approval.”

In such a climate of intolerance, there can be no freedom speech, expression or thought. 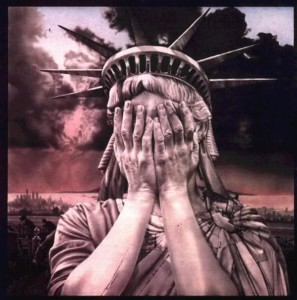 We have become a nation of snowflakes.

We have allowed our fears—fear for our safety, fear of each other, fear of being labeled racist or hateful or prejudiced, etc.—to trump our freedom of speech and muzzle us far more effectively than any government edict could. Ultimately the war on free speech—and that’s exactly what it is: a war being waged by Americans against other Americans—is a war that is driven by fear.

By bottling up dissent, we have created a pressure cooker of stifled misery and discontent that is now bubbling over and fomenting even more hate, distrust and paranoia among portions of the populace.

The First Amendment is a steam valve. It allows people to speak their minds, air their grievances and contribute to a larger dialogue that hopefully results in a more just world.

When there is no steam valve to release the pressure, frustration builds, anger grows and people become more volatile and desperate to force a conversation.

The problem as I see it is that we’ve allowed ourselves to be persuaded that we need someone else to think and speak for us. The result is a society in which we’ve stopped debating among ourselves, stopped thinking for ourselves, and stopped believing that we can fix our own problems and resolve our own differences.

Not only has free speech become a “politically incorrect” four-letter word—profane, obscene, uncouth, not to be uttered in so-called public places—but in more and more cases, the government deems free speech to be downright dangerous and in some instances illegal.

The powers-that-be understand that if the government can control speech, it controls thought and, in turn, it can control the minds of the citizenry. In fact, some of this past century’s greatest dystopian authors warned of this very danger.

In Ray Bradbury’s Fahrenheit 451, reading is banned and books are burned in order to suppress dissenting ideas, while televised entertainment is used to anesthetize the populace and render them easily pacified, distracted and controlled.

In Aldous Huxley’s Brave New World, serious literature, scientific thinking and experimentation are banned as subversive, while critical thinking is discouraged through the use of conditioning, social taboos and inferior education. Likewise, expressions of individuality, independence and morality are viewed as vulgar and abnormal.

In George Orwell’s 1984, Big Brother does away with all undesirable and unnecessary words and meanings, even going so far as to routinely rewrite history and punish “thoughtcrimes.”

And in almost every episode of Twilight Zone, Rod Serling urged viewers to unlock their minds and free themselves of prejudice, hate, violence and fear. “We’re developing a new citizenry,” Serling declared. “One that will be very selective about cereals and automobiles, but won’t be able to think.”

It’s time to start thinking for ourselves again.

Most of all, it’s time to start acting like people who will choose dangerous freedom over peaceful slavery.

As Dahlia Lithwick concluded for Slate:

To guarantee an escape from conflict, from violence, requires censorship. To have free speech in this moment, when the stakes are so high, is to live with fear. This is not an easy thing to confront—or to accept… Conversation might still be our best chance of getting out of this mess. Free speech is just free speech. It takes actual humans making the effort to talk to each other to transform speech into something more vital and more valuable. Conversations don’t always work. They may sometimes go wrong—horribly, terribly wrong… The First Amendment will never be able to protect us from horrible words and horrific acts. It does guarantee that we’ll keep talking.